Thousands march in support of nurses’ fight for 15% 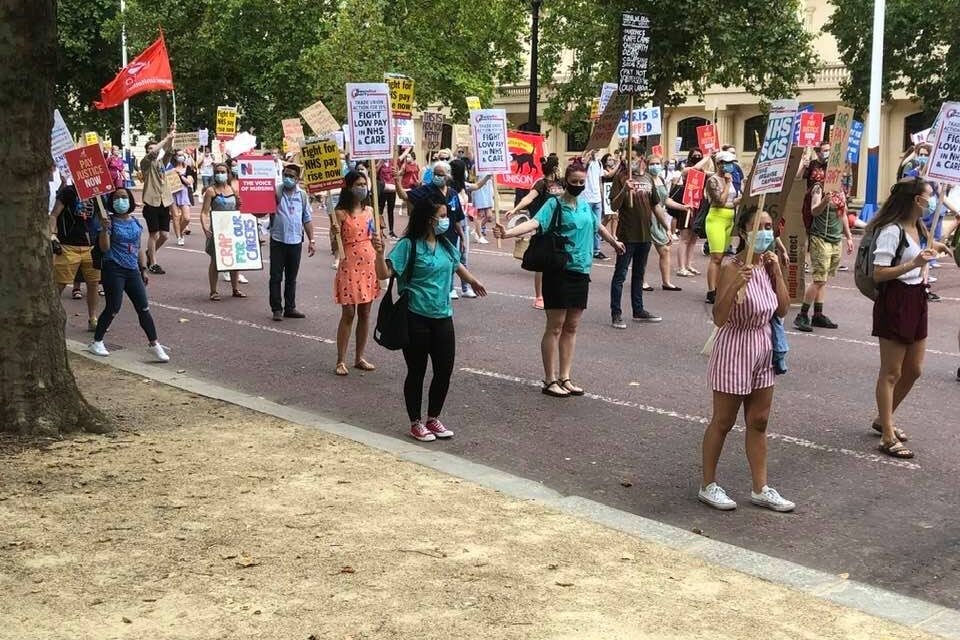 Over 1000 nurses and supporters marched in London on Saturday as part of a national campaign to demand a pay increase after being excluded from the recent public sector pay rise. Before setting off the socially distanced and masked demonstrators fell silent for three minutes to remember fellow health workers who had died during the Coronavirus pandemic.

Unison and Unite banners were prominent and contingents of nurses from several hospitals across London including Guys and St Thomas’ and UCH. The march then moved off from St James Park to Downing St and was fronted by a banner which read, ‘End NHS pay inequality, together we win!’

The mood was militant and loud with placards and slogans making it well clear the anger felt by nurses: ‘Clapping was nice, a pay rise is better’, ‘Nurses saved you from Covid so cough up Boris’, ‘Heroes shouldn’t have to use food banks’, ‘Underpaid, Understaffed, Overworked’.

After ten years of a public sector pay freeze and caps imposed by Labour and Tory governments to pay for the last crisis, health workers and others have seen their pay slashed by up to 20 per cent in real terms.

This year’s pay rise isn’t an act of generosity. The Tories are simply accepting the recommendations of the independent pay review boards, but the rise hardly makes a dent in the damage done by the pay freeze or a decade of austerity on staffing numbers, training and morale.

The RCN and 13 other unions wrote to the government at the start of July, asking for pay negotiations, due in April 2021, to be opened early, with the aim of securing a real-terms pay increase this year.

The experience of the 2018 deal, which RCN and Unison leaders misrepresented to their members, sparking an angry backlash, shows health workers need to keep up the campaign to open talks early, and insist on rank and file oversight of negotiations.

While the Labour Party has given its backing for early pay talks, the leadership will want to leave the initiative to the trade union leaders. But the health service is a central weapon in the fight against the pandemic, public sector pay is a political issue – and the main unions’ muted response to the fight for 15% doesn’t inspire confidence. Sir Keir Starmer and Labour MPs should be vocally supporting the nurses’ demands and stepping up the pressure on the government to pay all public sector workers a decent wage.

This is particularly important given the government’s predictable decision to vote down an amendment to the Trade Bill which would have required parliamentary scrutiny over deals involving healthcare. Boris Johnson promised to ‘take back control’, instead he’s preparing to hand over control of the NHS to Donald Trump and the US health industry.

But with overwhelming public support for an NHS pay rise, nurses and health workers can lead the way in fighting for a pay rise for all public sector employees. Millions of other key workers, especially those employed by local authorities or on privatised contracts have missed out.

The TUC and trade unions should coordinate to push claims together in the autumn as part of a wider campaign against the prospect of pandemic-induced mass unemployment and Brexit-induced price hikes, eroding standards of living and wiping out the feeble pay rises extracted in the last couple of years by electioneering Tory governments.

The NHS pay justice campaign has called the next day of action for 26 August. Red Flag will be supporting the action, calling for Labour and Unison leaders to back the revolt, healthworkers to organise cross-union action groups in every workplace, and the public sector unions to bring forward their claims together this autumn, to raise pay to pre-2010 levels, and put an end to workers being made to pay for the capitalist crisis.