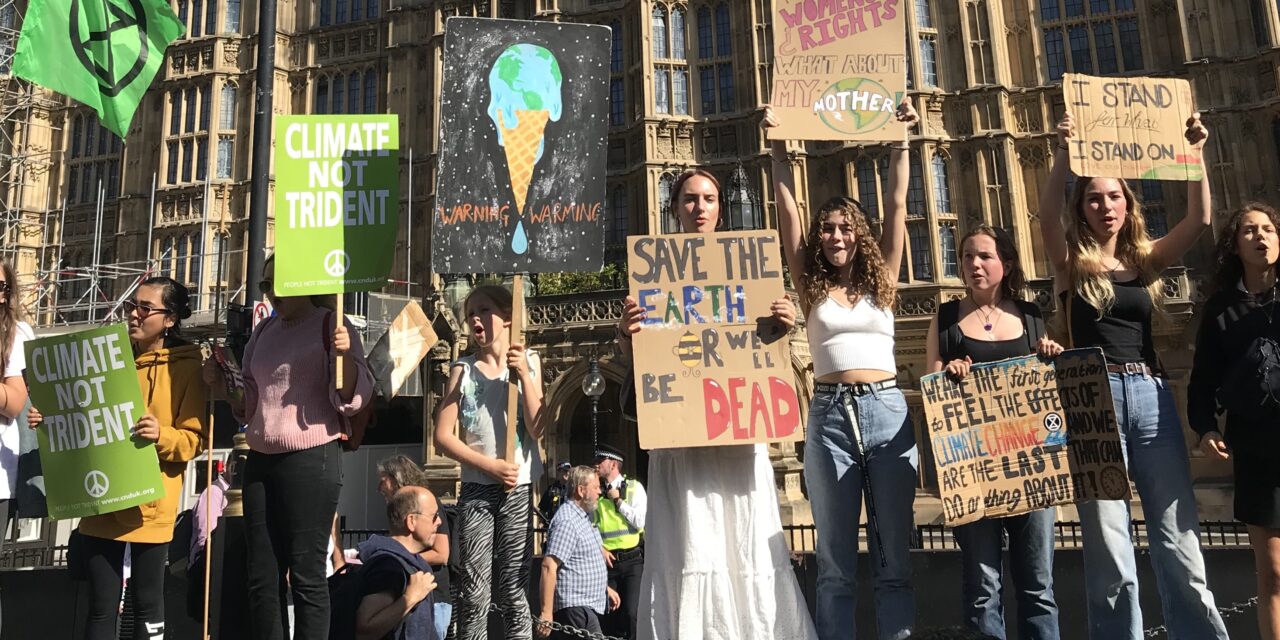 On November 29, millions of young people again took to the streets. The date for the “global climate strike” was deliberately chosen to put pressure on the UN Climate Change Conference (COP 25) being held in Madrid from 2-13 December.

There is still no slackening of the movement’s mobilising power. In 2,400 cities and 158 countries, young people, school and college students, joined increasingly by people of all ages, took part in the demonstrations and protest actions. This time around 2 million people worldwide responded to Fridays for Future’s call for a global climate strike.

The strongest mobilisations are still to be seen in the Western imperialist countries. Germany saw the largest number with over 600,000 taking to the streets. According to Fridays for Future, around 60,000 marched in Berlin, 55,000 in Hamburg, 33,000 in Munich and 20,000 in Cologne, to name just the largest demos. In some cities, like Frankfurt/Main, there were also blockades of shops, among them Primark, whose products are often produced by extreme forms of sweated labour and with no concern for the effects on the environment.

In the USA, actions took place in at least 80 cities. In Paris, protesters blocked Amazon warehouses. One of the world’s largest demonstrations packed the streets of Madrid.

In addition to Western Europe, North America and Australia, more people in Asian countries such as India and Pakistan joined the actions.

The global climate strike movement is alive and growing. But it is also increasingly confronting millions of activists with fundamental questions: How can the movement be successful? How can the impending catastrophe be prevented? How can a radical redirection in climate policy be enforced?

Here the political-strategic dilemma of Fridays for Future, as well as other parts of a newly emerging global movement, becomes apparent. On the one hand, its leaders denounce the inaction and failure of the heads of state of the major capitalist countries. In the article “Why we strike again” Greta Thunberg (FFF Sweden), Luisa Neubauer (FFF Germany) and Angela Valenzuela (FFF Santiago de Chile) sharply criticised the leaders of the global establishment.

“Strikes are not a choice we like; we do them because we see no other possibilities. We have observed how a number of United Nations climate conferences have developed. Countless negotiations have led to much vaunted, but ultimately empty, commitments by the world’s governments – the same governments that still allow fossil fuel companies to drill for more and more oil and gas and burn our future for their profits.

“Politicians and companies in the fossil energy industry have known about climate change for decades. And yet politicians continue to let the profiteers exploit our planet’s resources and destroy its ecosystems in their search for fast money that threatens our existence”.

On the other hand, the text’s conclusion reveals the key weakness of the movement. It remains an appeal to the rulers:

“To the leaders who travel to Madrid, our message is simple: the eyes of all future generations are on you. Act accordingly”.

The fact that COP 25 will also produce little more than hot air can already be foreseen. For years, no one has expected the World Climate Conference to provide any impetus. Under Trump, the USA has even left the circle of illustrious leaders. Others, such as the German government under Merkel, like to present themselves as “climate champions” – but above all represent the interests of major German industry.

None of the old imperialist powers, be it the USA or the countries of the EU, none of the rising powers such as China or Russia, none of the “emerging economies” such as India or Brazil, are willing to take on the costs of effective global measures against climate change. Everyone is in favour of climate action but they all insist that others should pay for it. And, into the bargain, it must be profitable. Compared to this, squaring the circle is easy.

At best, the World Climate Summit will once again demonstrate that the entire question of preventing climate change and ecological disaster is inextricably linked to the question of the social and economic system. The crisis can only be solved by a strategy of class struggle aimed at a transition to socialism. A “green” capitalism is no less impossible than a “social” or a “peaceful” one. Everywhere it is the exploited, oppressed sections of the population, the working class, the peasants, urban poor and the lower middle classes who are most affected by the ecological and social crisis.

Millions are already forced to migrate, displaced by the devastation of climate change. At the same time, the poor and exploited worldwide are to bear the entire burden of a new round of the global economic crisis, of an impending recession. The revolts and class struggles in Latin America are only a harbinger of this development.

The current situation therefore shows that the struggle against the destruction of the natural basis of human life, against the threatening ecological catastrophe, must be an integral part of the struggle for a different, socialist, social order, for a world in which production is not for profit but for the satisfaction of the needs of the great masses. Only on this basis can we develop a system of global planning that allows human needs and sustainability to be reconciled.

To achieve this, the movement must become aware of the system against which it is fighting. Appeals to governments to “do the right thing” will be fruitless. In a class society, it is not what is socially necessary that determines policies, but the plans of the ruling class – and these are incompatible with a rational, sustainable economy. This would remain true even if those who control corporations and large states were fully aware of the impending environmental catastrophe. Ultimately, they are functionaries of capital.

It is not about convincing them, but about building a movement that can put a stop to the ruling class and its governments. To do this, however, it must itself raise the question of property and the power that is inextricably linked to it.

To develop such a power, it is not enough to name the system and the opponents. To build a movement that can not only bring millions onto the streets, but really raise the question of power, we need climate strikes that paralyse production, ones that last not just a few hours, but lead to the implementation of concrete demands. In short, the global climate movement must rely on the working class as its central force. Only it can cripple the factories and thus the source of profit-making, that is, hit the rich and capital owners where it hurts. Only workers can reorganise production in alliance with the rural farming community in such a way that the needs of the masses and ecological sustainability are guaranteed.

To build such a movement, non-binding and inconsequential appeals to governments and companies to “assume their responsibilities” or explain the “climate crisis” are little or no help.

Rather, our demands must be concrete and directed against the large corporations and asset owners. There will be no turning away from an economy based on fossil fuels without dispossessing the big corporations in this sector as well as those in transport and communications. Ultimately, power must be taken away from capital in all important industrial sectors if we are to achieve, for example, a shift towards rail and other forms of public transport. Only if the large agricultural groups are expropriated can an ecological conversion of agriculture take place. A close integration of industry, services and science can only be beneficial, sustainable and effective if it is not subject to the dictates of profit-making. The expropriation without compensation of the large corporations and banks must therefore become a key issue for the environmental movement.

However, that is not the end of the matter. The bourgeois state, itself an instrument of the class that owns the means of production, cannot be left to control the ecological conversion of production and consumption. Therefore, the movement should advocate expropriation under workers’ control by corporate as well as socio-political control bodies, which can be developed into councils of producers and consumers.

The resources for the necessary measures for ecological reconstruction must come from the rich, the owners of capital and property and the wealthy imperialist states. The countries of the so-called “Third World” must cancel their debts, all forced dictates by the IMF and other imperialist agencies must be stopped. To finance the environmental measures, we need the expropriation of banks and financial institutions, big business and massive taxation of the rich.

At the same time, we must combat all attempts to make workers in industries such as mining and automobiles bear the cost of converting production in terms of lost jobs and devastated communities. We need to fight against all redundancies and for the conversion of production under workers’ control. The workers and technicians in these industries can play a central role in the ecological conversion of the economy, if their knowledge and experience are used accordingly.

The environmental movement therefore needs nothing more and nothing less than a global programme of action, a programme of transitional demands linking immediate action in individual countries with the struggle for a democratic planned economy. Only in this way, can the slogan “System change not climate change” be realised.