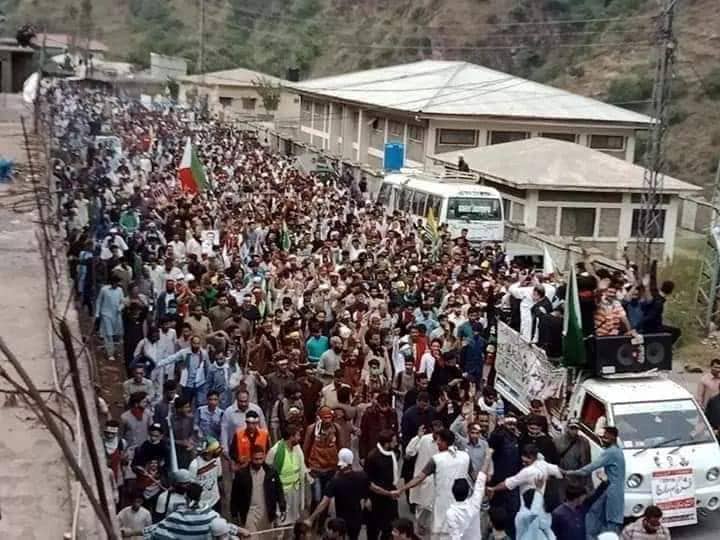 Since October 3, more than 30,000 people have joined the Azadi (Freedom) March in Kashmir. The protest is organised by the Jammu Kashmir Liberation Front, JKLF. Its declared goal is to pass the Line of Control, LoC, which separates the Indian and Pakistani occupied parts of Kashmir, and go on to Srinagar, which lies in the Indian-occupied region of Kashmir.

The Azadi March overcame the first hurdle that the Pakistani administration had placed in its way at Bandi Syedaan. Negotiations have begun between the JKLF and police so that more hurdles that police and other forces have placed to stop the march from proceeding may be overcome in a peaceful manner.

The Azadi March began on October 3 from Bhimber in response to the JKLF’s call. It passed through Kotli, Tata Pani, Hajera, Rawalakot and Bagh, and arrived in Muzaffarabad the same night. It then proceeded further towards Chakothi, which is where the JKLF has announced it will break through the cease-fire line or the Line of Control to force its way to Srinagar.

JKLF leader Syed Shoukat Jafri announced on October 6 that there were more than 30,000 protesters marching with them at that point. He reported that they had staged a sit-in in Bandi Syedaan. The police and other Pakistani forces clearly intend to stop the protesters from proceeding further at any cost. However, the protesters are unwavering and they are not prepared to back down. They plan to march ahead towards Chakothi tomorrow, October 7, where the plan is to break through the LoC.

At the sit-in, different leaders addressed the crowd, announcing their intention not only to breach the cease-fire line, but to liberate the state of Jammu-Kashmir and make it independent.

Meanwhile, the Indian media, acting as their state’s mouthpiece, have been presenting the march as if it were a terrorist conspiracy, an attack, for which Indian armed forces are fully prepared. At the same time, on the Pakistan side of the LoC the state has placed hurdles in the way of the march, suggesting that such a protest “plays into the hands of the Indian narrative”. The JKLF has responded that it is doing neither – it is a movement in its own right. The protesters have also articulated the wish for independence more clearly this time. The size of the protest has forced the media to report their demands, no matter in whatever light, on both sides of the LoC.

The RSM believes that the call of the JKLF to break through the LoC with this march is their democratic right. We defend the right of Kashmiris to free movement between both Indian- and Pakistan-administered parts of Kashmir, and breaking through the cease-fire line is an expression of that right. We support this march and oppose the hurdles being placed in its way as well as all kinds of violence against the protesters.

We appeal to the Pakistani and Indian working class to defend the democratic right of the protesters to participate in this march. We also believe that the Jammu-Kashmir People’s National Alliance and other groups must join hands to agree a clear strategy for the struggle and that they should form committees at the local level so that the movement can be strengthened in a democratic way against the occupations of Kashmir by both India and Pakistan and for a socialist, independent Kashmir as part of a Socialist Federation of South Asia.

The Revolutionary Socialist Movement is our sister section in Pakistan, part of the League for the Fifth International