Solidarity with Sodexo workers at Birkbeck! 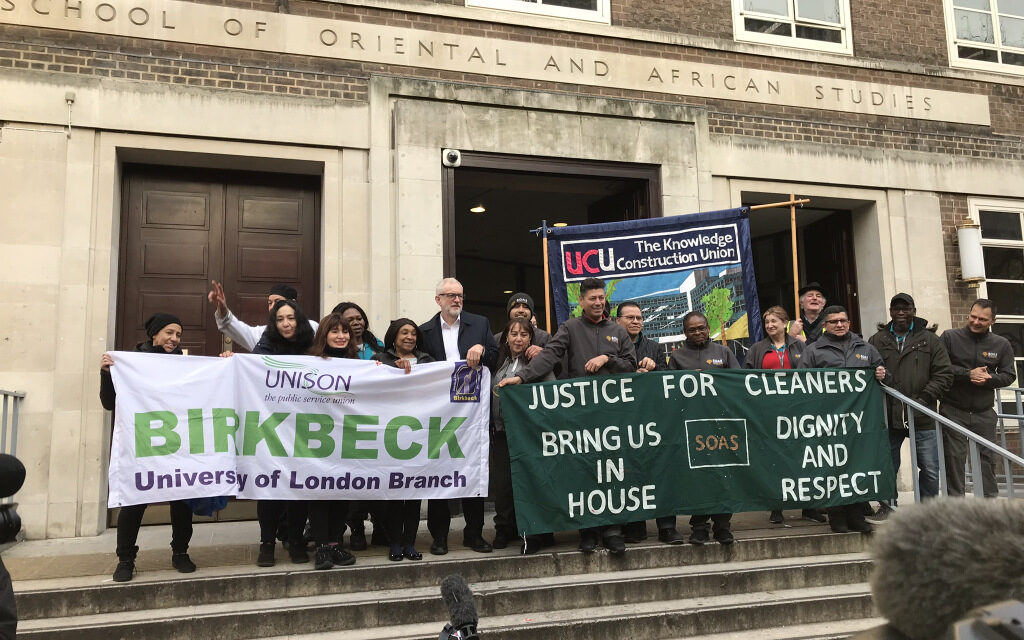 Threats of large-scale redundancies among outsourced catering staff at Birkbeck, University of London have sparked a campaign of resistance from Birkbeck Unison, which represents affected workers, with support from UCU and student activists.

Sodexo, the multinational conglomerate that runs the catering services at Birkbeck, has threatened 24 redundancies among its catering staff, with eleven roles expected to go and only one worker guaranteed employment in the new structure. In line with moves from managements nationally, including that of British Gas and Labour-run Tower Hamlets Council who have threatened to “fire and rehire” their entire workforces, affected workers at Birkbeck are expected to reapply for roles with reduced hours and increased workloads in the massively reduced post-pandemic structure.

Prior to the coronavirus pandemic, Birkbeck management had promised to bring all outsourced catering staff in-house before its contract with Sodexo ends in July 2022. As a result of delays to the process, catering staff remain employed by Sodexo and have not been able to negotiate with Birkbeck for job guarantees, unlike teaching staff who are covered by the recently agreed Jobs Protection Scheme. Birkbeck has ruled out insourcing the affected staff as an immediate solution.

With the aim of avoiding compulsory redundancies, UNISON activists and workers have been calling on Sodexo and Birkbeck management to provide further information on the planned restructure. Despite their efforts, workers were left without explanation for eleven days of the thirty-day consultation period—disgraceful treatment, which will no doubt be widely condemned.

Sodexo is headquartered in Paris and provides outsourced catering services and facilities management in numerous sectors internationally, as well as to numerous public institutions in Britain, including schools, prisons and probation services. The multinational has a long record when it comes to shameful treatment of workers’ rights—notably, in 2015 Sodexo-employed probation officers were replaced with “cash-machine style kiosks”.

The Birkbeck In-House Campaign writes: “Sodexo is one of the world’s largest multinational corporations and describes itself as a ‘global leader in services that improve Quality of Life’. It generated worldwide profit of €686 million in 2019; UNISON will strongly resist its callous attempt to put these workers out of a job.”

The workplace struggle at Birkbeck coincides with existing disputes at City, University of London and the nearby School of Oriental and African Studies (SOAS), where management have threatened up to 88 redundancies among its Professional Services staff. Affected workers at SOAS recently voted 74.8% in favour of strike action, which successfully pressured management into a commitment to no compulsory redundancies on 19 September.

The disputes at Birkbeck and SOAS are in no way unique in this brave new coronavirus world, with bosses in all the major industries responding to falling profits by slashing wage costs, insisting that redundancies are “essential” to balancing the books – in other words, maintaining profits for shareholders.

All students and workers at Birkbeck, SOAS and City should support those affected by the most recent wave of redundancies. As both the SOAS dispute and the national UCU strikes show, neither higher-paid professional support staff nor teaching staff are immune from similar attacks. All are being squeezed by the same relentless drive to complete the process of marketising the higher education systems.

Birkbeck Unison is calling on management to pause this rushed restructure until the effects of the pandemic can be established and a decision is made on the possible extension of the furlough scheme, as well as on Birkbeck to commit to meeting any salary gap for workers redeployed on new contracts.

In addition, we demand:

Fostering practical solidarity between rank-and-file trade union activists at Birkbeck and student groups, such as the newly-organised Birkbeck Student Anti-Racist Network (SARN), provides the organisational basis for resisting these redundancies, escalating other key struggles on campus, and taking the first steps towards rebuilding a campaigning student movement to defend the interests of all working and studying in higher education.