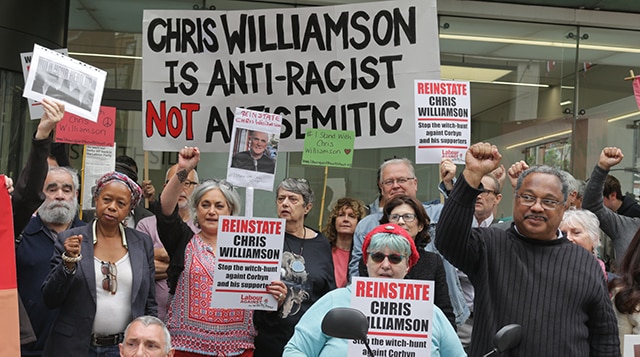 The Labour Party originally suspended Chris Williamson in February on allegations of antisemitism. The bases for this charge were that he had booked a room in the Palace of Westminster for Jewish Voice for Labour to show the film Witch Hunt and a speech he made to a Momentum meeting.

On 26 June, after investigation, the suspension was lifted. An immediate furore broke out. Tom Watson, Labour’s deputy leader, called for the decision to be reversed and within days the party re-suspended him.

The media reported that he had been suspended because he had said at the Momentum meeting  that the “Labour Party had been too apologetic about antisemitism”. In fact, what he said was the following:

“The party that’s done more to stand up to racism is now being demonised as a racist, bigoted party. I’ve got to say I think our party’s response has been partly responsible for that because in my opinion… we’ve backed off far too much, we’ve given too much ground, we’ve been too apologetic. We’ve done more to actually address the scourge of antisemitism than any other political party, any other political party. And yet we are being traduced.”

Clearly he was not saying that the party should not concern itself about any real examples of antisemitism, let alone that it should not expel members proven guilty of it.

Williamson’s statement that the Labour Party had not been sufficiently robust in rebutting charges that antisemitism was rife in the party, particularly on its left wing, is fair comment. Indeed, it is simply true.

To keep apologising in the face of non-proven, non-specific, non-quantified accusations is unnecessary and damaging to the party because it lends credibility to them. The real reason the press and right wing of the party profess to be offended is that they do not want to see a man who has consistently defended the rights of the Palestinians elected as prime minister. For that they should apologise.

Antisemitism loses all meaning and is dangerously devalued if it is extended from fomenting hatred of Jews as Jews to opposing the actions of Israel against the Palestinians.

Certainly, whenever “anti-Zionists” blame all Jews for Israel’s actions, this is indeed antisemitism and has to be combatted with the greatest seriousness and punished. But Williamson’s remarks do not fall into this category and he should be reinstated.

Labour’s general secretary, Jennie Formby, has ruled that “individual disciplinary cases that are being/have been dealt with through the NEC Disputes Processes are confidential. Motions on individual cases are therefore not competent business for discussion at CLPs and will not be discussed by the NEC or any associated bodies”.

Yet Labour MPs, acting like superior beings above all rules, have done more than comment; they have used the media to demand the reversal of an investigation and judgement by a properly constituted party committee, undermining the party’s credibility on this issue.

Some on the left claim that branches or CLPs cannot discuss the Williamson case because it breaches the rulebook. But to fail to do so is far more serious. To say we must support the general secretary because she is a Corbyn supporter is simply feebleminded.

Iain McNicol used the same powers against the Left when large numbers of new applicants were denied membership, often for unknown reasons. These powers to ban debate will be used against us in the future no doubt. That is why rank and file members should protest against Formby’s ruling.

Other leftists are refusing to support Williamson’s reinstatement by retailing a series of accusations against him as supportive evidence. Certainly, some of his Facebook postings and links, while not antisemitic, have involved people who are, such as his tweet of appreciation of pro-Assad blogger Vanessa Beeley. He has recognised this and apologised.

Our political criticism of him relates to his support for a “left” Brexit, as well as for Assad and Russia’s intervention in the Syrian civil war. But none of these issues are evidence of antisemitism on his part. We should not concede to the press-induced moral panic and Labour’s right wing, pro-Israel lobby in any way.

Owen Jones, Ash Sarkar, and the Alliance for Workers’ Liberty have also joined the witch-hunt. The AWL’s characterisation of those who do not recognise the right of the state of Israel to exist as “left antisemites” is based on their own denial of the Palestinians’ right to return to lands from which they were driven in 1948, itself a clearly racist position.

Most notorious on the left Momentum caudillo Jon Lansman who replied to a tweet from Williamson:

“This tweet reveals not one iota of contrition nor any acknowledgement of wrongdoing following a further formal warning from the Labour party for behaviour grossly detrimental to the party. Such contempt for the party’s verdict! He has to go!”

In fact it is Lansman who should go. A democratic conference of local Momentum and Labour Left groups should take place as a matter of urgency, so that left activists can decide the left’s policy, not Lansman, acting as a free agent.

Saying that the Labour Party has been too apologetic in defending its own record on antisemitism cannot compare to the record of those who launched and supported wars in Afghanistan and Iraq and who today say nothing about Israel’s ongoing brutalising of the Palestinians. Yet Tony Blair remains a member, despite bringing the party into disrepute with millions of voters and members.

In sharpest contrast, Corbyn has brought in hundreds of thousands of new members. To countenance the claim that Labour represents “an existential threat” to Jewish people is probably the most outrageous slander in British politics in living memory.