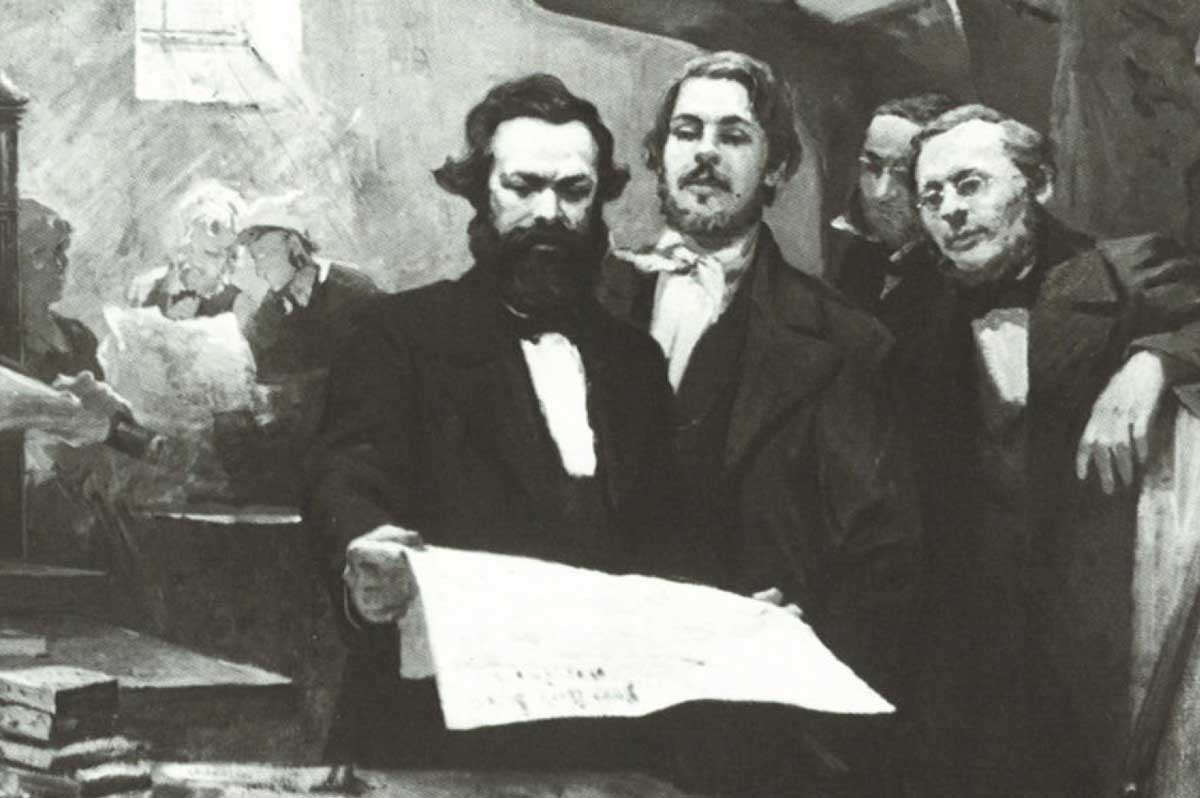 1. The Class Struggle and Socialism

Questions:
What are classes and why are they important for understanding history?
How do historical changes take place?
In what sense is the modern working class similar to previous oppressed classes and in what sense is it different?
Why is the working class the agent or carrier of socialist change?
Is socialism the automatic result of the development of capitalism?
Can socialist production be organised in some areas or industries within the overall capitalist system and if not, why not?
What is the difference between utopian and scientific socialism?

Questions:
How do Marxists answer the argument that historical and political change is mainly gradual?
What is a revolution? Why do Marxists believe that revolution is necessary and possible? What is the difference between socialist revolution and earlier types of revolution?
Is violence ever justified? Can there be non-violent change? What would be the consequences for the working class if the reformist road were followed to its conclusion? Why are reformist ideas so strong within the working class movement?

Reading:
The Urgent Tasks of our Movement (Lenin)
Where to Begin? (Lenin)
The Organisational Structure of the Communist Parties, the Methods and Context of their work (Communist International)
What is to be Done? (Lenin) – especially part I (D), Part II and Part III
Theses on Communist Organisation

Questions:
What are the component elements of Marxism and how do they relate to each other? What is philosophical materialism? What is the dialectic? How do these concepts relate to Karl Marx’s theory of history? Is Marxism more than a method of prediction and perspective? Is Marxism a science? What should we make of Lenin’s statement that Marxism is ‘all-powerful because it is true’? Is Marxism a closed or finished system? Can Marxism be developed to take account of new and changing phenomena, and, if so, how?

Questions:
Why does Marx begin his analysis with an examination of the commodity? How does he distinguish between the use-value and the exchange value of a commodity? What is the source of value and how can this be proved? What is labour-power? What is exploitation? Are workers paid the true value of their labour-power? What is wrong with the slogan ‘A Fair Day’s Work for a Fair Day’s Pay’? How does capitalism conceal its exploitation of the worker? Can capitalism continue forever?

3. Marxism and Philosophy: The Materialist Dialectic

Reading:
The ABC of the Materialist Dialectic, from In Defence of Marxism (Trotsky)
Anti-Duhring (Engels)
An Introduction to the Logic of Marxism (George Novak)
Ludwig Feuerbach and the End of Classical German Philosophy (Engels)

Questions:
What is formal logic? What are its limitations? What are the laws of dialectical logic? Does dialectics abolish formal logic? Give applied examples of the main laws of the dialectic from a) nature, b) politics, c) personal life. Is the dialectic intrinsic to the Marxist method?
What is materialism? What is idealism? Can the existence of matter independent of our sense-perceptions be proved – and if so, how? Is it possible to adopt a consistently materialist point of view without the dialectic? Is it possible to adopt a consistently dialectical approach without materialism?
What does the Materialist Dialectic tell us about the relationship between human beings and history, the individual and society, the objective and subjective factors in human development and the relationship between the party and the working class?

4. The Transition from Capitalism to Communism

Reading:
State and Revolution (Lenin)
Critique of the Gotha Programme (Marx)
The Degenerated Revolution – chapter 1, the transition from capitalism to communism (Workers Power/IWG).
Socialism: The transition to Communism

5. Marxism and the family

Reading:
The Origins of the Family, Private Property and the state (Engels)
Marxism and Women’s’ Liberation (LRCI)

Questions:
Can Marxism explain the existence of women’s’ oppression? Does the oppression of women pose a problem that cannot be answered by historical materialism, with its stress on social relations of production and class antagonism? Explain the origins and social roots of the oppression of women, youth and sexual minorities. Why does Engels identify the origins of both the state and the patriarchal family in the break-up of the primitive commune? Does subsequent anthropological work confirm or undermine Engels’ position? Why did the Communist International insist that there is no distinct ‘woman question’ separate from the class struggle as a whole? Do working class men benefit from the oppression of women? Should we support the demand for wages for housework? What are the programmatic errors of the feminists and the ‘economists’ and how can a revolutionary programme against women’s’ oppression be developed today?

Questions:
What is ‘economism’? What is the significance for Marxists of correctly appraising the relationship between spontaneity and consciousness? What for Lenin is the spontaneously arising ideology of the working class movement? What are the limits of trade union ideas and trade union politics? What did Lenin mean by describing trade unionism as ‘the ideological enslavement of the workers to the bourgeoisie’?
If, as Lenin says, ‘class political consciousness must be brought to the workers from without’, how can this accord with Karl Marx’s dictum that ‘the emancipation of the working class must be the act of the working class itself’? What is the distinction between propaganda and agitation? What should the role of the socialist intelligentsia be in the revolutionary party?
What is there in common between economism and
i) terrorism, ii) separatism, iii) processism.

2. Lenin and the National Question

Questions:
Why is the national question a bourgeois question? Why does it have a ‘negative character’ for Marxists (Lenin). Why do Marxists support certain national struggles and not others? What principles govern that support? How can the proletariat fight for national ie bourgeois rights whilst maintaining its class independence?
What is a nation? What do Marxists mean by the right of nations to self-determination? When should Marxists support demands for national autonomy and/or independence? Should Marxists ever support separation by nationalities from workers’ states?

Questions:
What for Lenin are the distinguishing features of imperialism as a distinct phase of capitalism? Why does he call it the highest stage? Is imperialism a policy or a system? Does imperialism develop the colonial world or strangle it? Can we speak of ‘imperialism’ today when most of the former colonies have won political independence? What are the political consequences of Lenin’s theory? What is the ‘labour aristocracy’? In what sense does imperialism prepare the world for socialism?

4. Lenin and the Struggle against Imperialist war

1. Bolshevik, Menshevik and Trotskyist concepts of the impending revolution

Questions:
What is a bourgeois revolution? Why were all the factions of the Russian Marxists agreed that the coming revolution would be bourgeois? What were the principal questions that were impelling Tsarist Russia towards revolution? What was the main difference between Lenin and the Mensheviks on the character of the revolution? What did Lenin mean by the ‘democratic dictatorship of the proletariat and peasantry?’. Why did Trotsky regard this slogan as inadequate? Did Trotsky’s theory of permanent revolution involve underestimating the peasantry or ignoring the bourgeois character of the revolution?

Questions:
What forces and what illusions were exhausted and weakened in the 1905 revolution? What is the significance of the soviets which emerged in 1905 and can they only arise spontaneously? What was the nature of the Bolsheviks’ initial sectarian error in 1905 and what caused it? What did 1905 show us about the role and significance of the General Strike as a tactic? Should the Petrograd Soviet have launched an armed uprising? Were the Bolsheviks wrong to launch a rising in Moscow, as Plekhanov later claimed?

Questions:
In what sense were the April Theses a break with the ‘Old Bolshevism’? What was dual power? Why did Lenin argue against an insurrection in July? How did the Bolsheviks use the method of the united front as regards the Provisional Government and how important was this in winning over the masses to Bolshevism? What were the implications of the Bolshevik slogans for ‘Constituent Assembly’, ‘Bread, Peace and Land’ and ‘All Power to the Soviets’? What was significant about the Bolsheviks’ response to the Kornilov coup? What are the conditions for the success of an armed insurrection? If Lenin had not returned to Russia in the spring of 1917, would there have been an October Revolution? What does this tell us about the role of the individual and political leadership in history?

4. Did Lenin lead to Stalin?

Questions:
Did Lenin’s stress on a centralised and disciplined party lead directly to Stalin’s one-party state? Did the failure of socialist construction in Russia prove the Mensheviks right? Could there have been an alternative, peaceful, parliamentary outcome to the events of 1917? What were the main differences between the regime of the Bolsheviks before and after the rise of Stalin? What should we make of the following measures of the Bolsheviks in power: i) the dissolution of the Constituent Assembly, ii) the suppression of other parties, iii) the repression of the Kronstadt rising in 1921, iv) the Ban on Factions in 1921? What measures must the working class adopt to avoid the bureaucratic degeneration of 21st century revolutions? Did Lenin lead to Stalin?

Our site uses cookies. By continuing to use the site, you consent to the use of cookies.