Overthrow Capitalism – Save the World 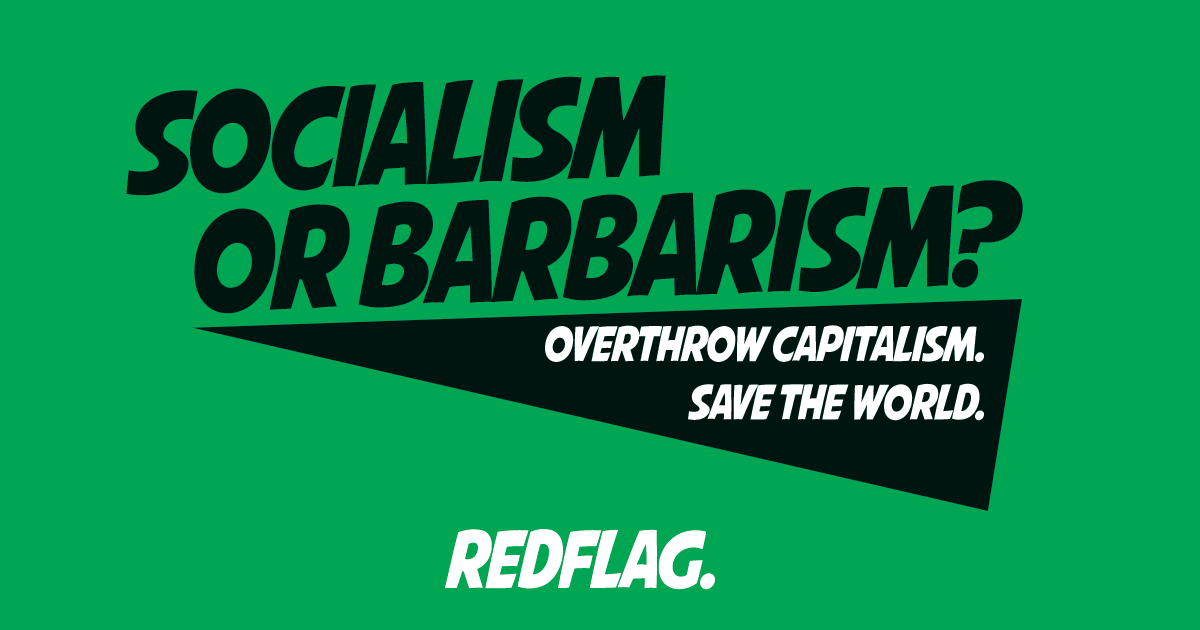 Both reformist and radical Greens fail to identify capitalism as the enemy, and the working class and rural poor as the force that can save the planet. Their alternatives will not work.

Green taxes and individual lifestyle changes shift the burden onto consumers, making workers and the poor pay for climate change, while subsidising big business which creates it. Foodbanks and poundshops do not provide green options. Make the polluters pay, not their involuntary consumers.

Neither is “degrowth” an option that the majority of humanity can countenance, while billions lack the essentials of life. Growth – the production of the real necessities of life – has to be combined with a huge reduction in waste and with re-growth and sustenance of the environment.

A rapid planned phasing-out of fossil fuel and a technological revolution in sustainable energy generation – wind, wave, and solar – can only be achieved by radical, anticapitalist measures. In the coming general election, we should demand Labour includes the following demands in its manifesto – and organise from below to make it happen.

• Expropriate the polluters: Nationalise energy and mining companies without compensation. Phase out nuclear power and fossil fuels with a massive investment in sustainable energy and an integrated transport policy. Zero emissions within the timescale set by the scientists.

• Land to the tillers: Nationalise the big landowners, agribusiness and fishing industry without compensation. A state investment bank to provide funds to support small farmers, agricultural labourers and rural communities. For a major programme of spending on flood prevention and defences.

• Clean up our act: For a massive programme of investment in free public transport. Ban the use of private cars except in case of proven need. Nationalise companies and punish employers who pollute the environment. Strict controls on the use of plastic packaging. A public works programme to clean up our cities, shores and countryside.

• Stop polluting the planet: Launch and fund an international campaign to clean up the seas, establish recycling facilities, reverse the destructive effects of mining and waste dumping, and replace polluting industries with Green alternatives. End the export of domestic and industrial waste. Ban the import of goods produced through deforestation. Withdraw from trade in carbon derivatives. Halt expansion of UK airports.

To achieve this, much more than big protests and militant direct actions to raise public awareness are needed. The working class mass organisations – the Labour Party and trade unions – must be drawn into the heart of the struggle. Labour’s promise of a Green New Deal has to make the link between averting climate catastrophe and preserving jobs, reducing the working week and providing resources for major social reforms.

It’s a great step forward that the students are now trying to convince workers to strike too, ambitious as it is at a time of austerity, stagnant wages and vicious antiunion laws. To succeed, we need not only to convince workers on the issues, but also mobilise their knowledge of the workplace and industry, their mass power to strike and shut down the profit system, their ability to develop and run new environmentally-clean processes.

We can give our movement deeper roots by forming local climate change action committees. By going beyond loose horizontal gatherings to building groups in school, unis and workplaces and linking them through democratic committees, we are creating structures that unions could affiliate to and take part in. Such democratic committees could begin to build not only mass protests and real mass strikes, but provide the basis for organising and coordinating nationally and internationally.

The bodies to fight for these anticapitalist demands would develop out of a mass struggle for the green industrial revolution. Popular Assemblies, which privilege those who can afford to spend days and weeks on an action and dissolve when the action finishes, will not do. Citizens’ Assemblies are undemocratically chosen by lottery and discourage real debate between mass parties and tendencies.

But the history of real revolutions has provided us with some models we can adapt and adopt. Workers councils and defence organisations that underpin and protect the movement, and disarm its opponents, would provide an alternative to the capitalist state, with its shallow, parliamentary cover that doesn’t really give people a say. Climate change action committees unleashing a mass movement could provide a step towards such bodies.

Globally the peasantry, the poor and indigenous peoples in the Global South are also a crucial ally if we have any hope of stopping deforestation, species loss and desertification, and poverty, as well as fighting for sustainable development. But given struggles and revolutions continue around the world from Hong Kong to Sudan, an international party – a voluntary organisation united by a democratically agreed programme of action and common discipline – can be built in time to avert catastrophe.