Mass protests against rape in Bangladesh 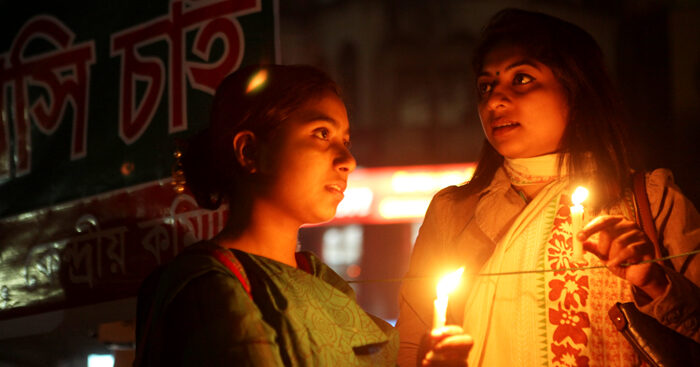 By Joe Crathorne and KD Tait

The death penalty has been introduced for rape cases in Bangladesh in response to a week of demonstrations against widespread and increasing sexual violence against women and girls.

The protests erupted in the capital city Dhakar, after graphic footage showing a group of men sexually assaulting a woman went viral on social media. Anger spread quickly, and protests were called in several locations across Bangladesh.

Women’s and student organisations were among the first to call for demonstrations, including the Bangladesh Students’ Union Central Committee, who issued this appeal on 11 October:

“Bangladesh Students’ Union sends out an international call for solidarity to our friends and comrades all over the world; to join us in this fight against rape and sexual assault. Your solidarity in the form of demonstrations, online messages, recorded statements, would be a vital part of our fight in Bangladesh. The government is failing to provide safety and security to its citizens, and instead mobilizing police and thugs to attack our protests. Thus, we call to all of you comrades, to join us and stand together in this fight.”

Student organisations have played a prominent role in protests throughout the year in response to a series of rapes of women students in the capital.

The sharp rise in cases over the last year – from 942 reported in 2019, to over 1,000 in the first nine months of 2020 – can be partly attributed to the social changes in a country where traditional patriarchal values are coming into conflict with increasing numbers of women entering the workforce and education. Sexual violence is a means of terrorising women into accepting a subordinate status to men.

But as in virtually all countries, systemic sexism breeds a culture of impunity in the legal system. The conviction rate for reported rapes in Bangladesh is below one per cent, hampered by institutional sexism within the police and judiciary, and colonial-era laws which encourage lawyers to attack the moral character of accusers.

As a result, survivors face stigma, loss of employment, and, particularly in rural areas, are often obliged by the families to marry their rapist.

The Bangladeshi government’s decision to introduce the death penalty, which was demanded by many protesters, but is specifically opposed by the Rape Law Reform Coalition, a women’s rights group in the country, is pandering to religious and conservative prejudices among the protesters, instead of adopting the democratic reforms demanded by women’s organisations.

The example of neighbouring India, which has also witnessed waves of mass protests against rape and sexual assault, shows there is no evidence that the death penalty discourages rape. In fact, death sentences make jury convictions less likely, and in a country where intimidation of victims is rife, it can discourage survivors from reporting attacks.

Women’s organisations in Bangladesh are campaigning for a number of democratic reforms, which should be taken up by the labour movement, including witness protection, expanding the definition of rape, outlawing the use of character evidence, and the introduction of consent and sexual education in schools.

Just as the defence of women cannot be left in the hands of the family, so it cannot be left to the state or its coercive instruments, no matter how many gender-sensitivity courses police officers are sent on.

In the campuses and working class districts, self-defence groups formed of men and women should be formed to combat anti-social, oppressive and violent behaviour directed against women and oppressed groups.

Since rape and sexual violence is closely correlated with women’s inferior social position, the labour movement must take up the struggle not only for democratic reforms, the massive expansion of state-funded refuges, public services to relieve women from the burden of domestic labour, but also for equal pay, against sexual harassment in the workplace, and for the full and equal participation of women in the trade union movement, including the self-organisation of women and other oppressed groups into caucuses to combat prejudice.

The Bangladeshi and Indian protests have to be seen in the context of a growing worldwide movement against rape and sexual violence, which constitute the physical expression of women’s subordination to men in class society.

The fact that sexual violence against women, and increasingly against children, is on the rise, from the semi-colonial world to the advanced imperialist centres, demonstrates that, while the oppression of women can take different cultural forms, its essence is intrinsic to class society. Within the capitalist mode of production, women’s oppression underpins profit through unpaid domestic labour in the home, and super-exploitation in the workplace.

While some advances have been made in the west, through limited state-provided health and social care, education, rights to divorce and reproduction, the brutal exploitation of the semi-colonial working class by the imperialist states makes such reforms a utopia in the under-developed world for as long as the profit system and division into antagonistic classes exists.

The call for international solidarity from Bangladeshi students shows a move in this direction, and it is the duty of socialists across the world, especially in the West, to answer this call.