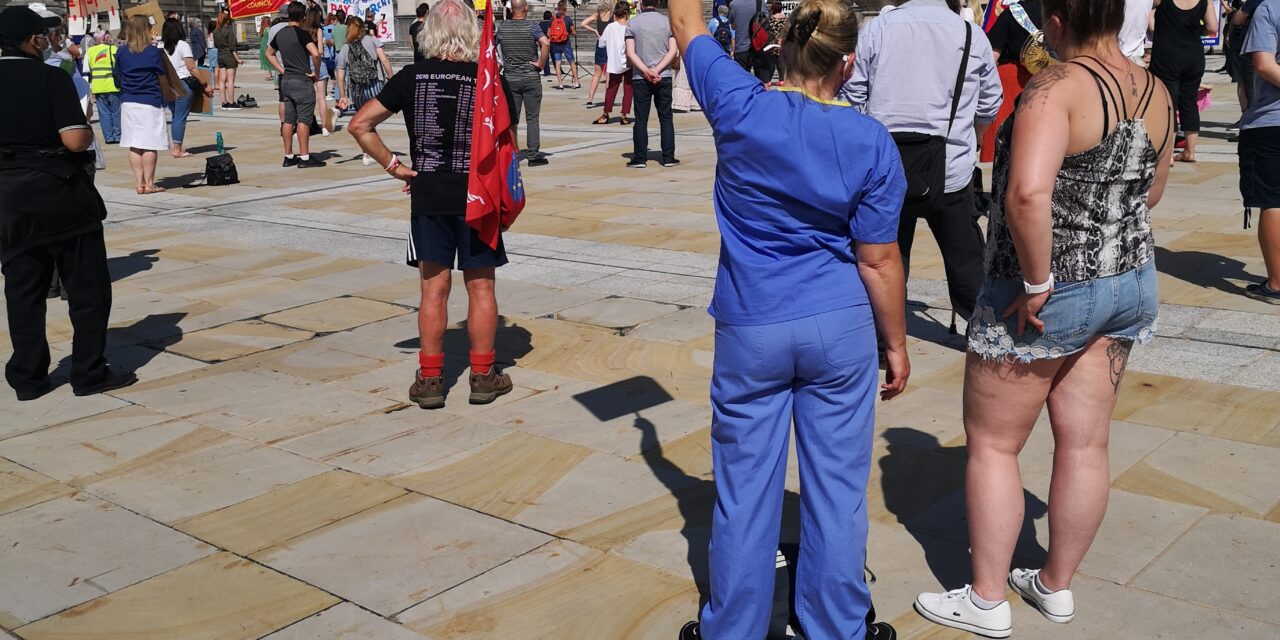 On Saturday, hundreds gathered in Millennium Square as part of the nationwide day of action calling for justice for NHS nurses and health workers who have been excluded from a recent public sector pay rise. The rally was led by two union reps in scrubs and attended mainly by other NHS workers.

Alongside speeches from the organisers, Leeds Trades Council and reps from other unions spoke in support of the demand for a 15% pay rise for NHS staff. In the open mic section of the event, hospital workers spoke about the pressure of the past few months – the overtime, stress and fear.

Speakers explained that NHS pay has fallen in real terms over the past decade and 15% would not even cover that loss but would help pay the bills and solve the crisis in recruitment and retention. Protesters chanted “you clapped us, you slapped us, now pay us!”

One hospital worker asked “if industrial action is called, will everyone here take part?” to cheers from the assembled crowd.

However, hundreds of protesters in a city with two major hospitals exposed the lack of support from the major NHS trade unions and professional associations – Unison and the RCN. Rather than backing the campaigners’ demand for 15%, the unions are calling on the government to bring forward pay talks scheduled for April 2021.

That a grassroots protest was organised, not just in Leeds but across the country, demonstrates the level of rank and file anger at the contempt the government has shown to NHS staff through this pandemic.

To draw in larger numbers of colleagues and force the unions to take up their demands this grassroots movement must become an organisation of rank and file health workers, by creating cross-union action groups in every workplace, and electing a coordinating committee to take action if the trade union leaders continue to drag their feet.

With massive public support for the NHS, healthworkers can lead the way in fighting for pay justice not just for NHS workers, but the millions of other key workers in the public and private sector whose wages and standards of living have been decimated by ten years of Labour and Tory austerity.

The next day of action will be on 26 August. Red Flag will be supporting the action, calling for Labour and Unison leaders to back the revolt, healthworkers to organise cross-union action groups in every workplace, and the public sector unions to bring forward their claims together this autumn, to raise pay to pre-2010 levels, and put an end to workers being made to pay for the capitalist crisis.

Download our bulletins to hand out here. Agree with what you’ve read? Join us!