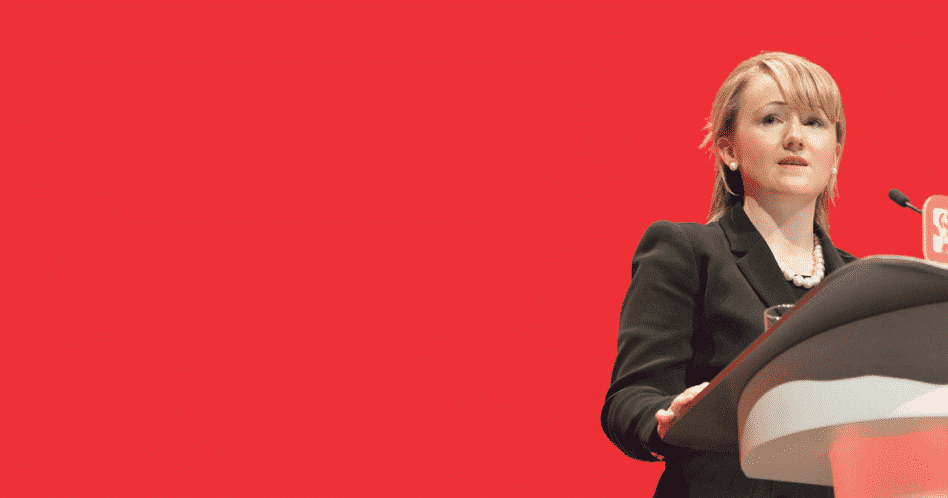 Controversy erupted in the Labour movement last week in response to leadership hopeful Rebecca Long-Bailey’s comments about religion and abortion, first made in response to a general election questionnaire sent to local candidates by Catholic priests at Salford cathedral.

In her response to the set questions, Long-Bailey defends Catholic education, and while stating that Labour’s position is to “uphold women’s reproductive rights and decriminalise abortions”, makes clear that personal religious convictions make the issue a difficult one for her.

Red Flag supports Rebecca Long-Bailey in the ongoing election, but her comments merit scrutiny not only because she is a leading contender for the Labour leadership, but because they are set against a backdrop of intensifying attacks on women’s social and reproductive rights driven by the advance of religious conservatism around the world.

Currently, in the UK, the legal limit for most abortions is 24 weeks; the exception is if there is a substantial risk that the child will be born with serious disabilities, in which case there is no legal limit. Long-Bailey stated that she does not agree with this position, and believes instead that disability and non-disability should be “valued equally” in abortion law.

Many have defended this statement, arguing that it is simply an expression of the progressive conviction that legal discrimination based on disability is wrong. But this laudable principle must be judged in its social context, where women’s right to choose is neither comprehensive nor universal, and the reproductive rights that do exist are constantly under threat.

Abortion was only partially decriminalised in Northern Ireland last year, and the 24-week term limit itself represents a continued enforcement of state control over women’s bodies. An abortion is only legal if it meets certain conditions, including authorisation by two separate doctors, who must determine that continuance of the pregnancy would harm a woman’s physical or mental health. Any abortions which take place outside of these legal limits constitute a crime under the Offences Against the Person Act.

The number of abortions performed post-24 weeks is low – just 0.6% of all those performed in 2018. But their legality is essential for those who do make use of it, often because foetal abnormalities have been detected late in the pregnancy. Removing the disability clause would mean forcing women to carry to term infants requiring substantial social and financial support which they may not be prepared or equipped to give, with potentially disastrous consequences for the lives of both mother and baby.

The only defensible approach to equalising reproductive rights with regard to disability is the clear and consistent call for full decriminalisation of all abortions, alongside further measures supporting women’s bodily autonomy, including free access to contraceptive products. Without these essential demands, the call for ‘equality’ amounts to implicit support for a levelling down of rights.

Since the backlash in response to her initial comments, Rebecca Long-Bailey has signed a pledge to defend and extend reproductive rights. This is a welcome clarification of the stance previously conveyed in the election questionnaire, where she stated the Labour Party’s position on reproductive rights with no endorsement, and emphasised that she would play her part in ensuring the views of her Catholic constituents are heard in any public consultation on women’s reproductive rights. Many have dismissed this, too, as an uncontroversial statement of representatives’ responsibility to represent all constituents.

But advocacy for the reactionary social ideology of the Catholic church is not a neutral position as far as women’s rights are concerned. The Catholic church has vast resources and certainly does not need support from Labour politicians to make their opinions on abortion known; meanwhile it is women from the most disadvantaged and oppressed layers of society who suffer most from restrictions on reproductive freedom and are least likely to have their interests represented at the highest levels of policy-making.

Moreover, far from being just two of many happily co-existing constituent priorities, promoting the values of the church and advancing women’s material interests are directly conflicting objectives. For centuries the church has acted as a powerful mechanism of control over women’s bodies, essentialising their role in the family and using biblical orthodoxy to justify a patriarchal social order. To this we can add its homophobic views, the source of much suffering. Socialists see the church as an oppressive institution which can have no place in state affairs.

This does not mean that we seek to ban the church or exclude all believers from political activity. Indeed, personal freedom to practice any religion or none is an essential condition of social emancipation. But we also see the influence of religion in society as closely connected with the class struggle, and we fight for the advancements in material conditions which enable greater numbers of people to throw off the yoke of spiritual oppression. We raise the demand for complete separation of church and state, and church and school. When children reach an age where they can form their own views we defend their right not to attend religious services or wear religious dress or symbols. Religion must be relegated irreversibly to the realm of the personal conscience of parents and children, and the teaching of faith left exclusively to the religious bodies themselves.

In affirming that she supports and values the role of Catholic schools in society, Long-Bailey fails to recognise the importance of the socialist principle of secular education. About one third of state funded schools in England have a faith designation. Approximately 68 per cent of these are Church of England (Anglican) schools and 30 per cent are Roman Catholic. 9 per cent of all state-funded secondary schools are Roman Catholic.

Religious schools play a reactionary role in diverting state funds towards the perpetuation of religious ideology and in maintaining the churches’ extensive property holdings, an intolerable vestige of feudalism and an important source of social influence.

Though faith schools are subject to government regulation and are required to teach Relationships and Sex Education, a 2018 study found that more than three-quarters of state-funded secondary faith schools in England are not teaching the subject impartially, making use of the statutory allowance for schools to teach “in accordance with the tenets of their faith”. The study found that many of these schools teach that sex before marriage and most forms of contraception are wrong, directly undermining the prevention and education initiatives which are the best deterrents of unwanted pregnancies.

Some activists and commentators have reacted to Long-Bailey’s comments with the defence that, so long as she doesn’t actively obstruct Labour Party campaigning on reproductive rights, she is entitled to express her private opinion on the issues without reproach. But for a high-profile Labour MP and potential party leader, the idea that a public view can be discounted as a ‘private opinion’ is ridiculous. Political leaders are given a public platform because they represent more than just themselves; for this reason, they speak for the movement in their every public interaction. MPs are entitled to personal opinions but the moment they are expressed publicly, these become political statements. We have a right to insist that MPs and the party leader express as well as they can the party policy on issues like abortion an contraception, secular education etc. and the reasons the party has for these positions, whilst being free to give the religious reason why they personally would not, for example, have an abortion. If they cannot do this then they should not stand a an MPs or leader.

The idea that religious views deserve an exemption, for example the treatment of parliamentary votes on abortion rights as a ‘matter of conscience’, which can be expressed with immunity from political criticism, is a testament to the privilege that is still afforded to religious reaction in society. In a ‘broad church’ like the Labour Party we support the right of MPs and activists to advocate publicly for a change in party policy. But if any elected representative feels uncomfortable actively promoting and fighting for an established position, they should either keep it to themselves, or express their position openly as a political disagreement which they are prepared to debate and defend.

Public pressure seems to have played a part in Rebecca Long-Bailey’s ‘clarification’ that she “unequivocally supports a woman’s right to choose”. Yet her absence from multiple parliamentary votes on abortion does not inspire confidence in this statement. At a time when the Christian right globally is renewing its attacks on reproductive freedom, passive disengagement on the issue is insufficient.

As the campaign pledge now backed by all leadership candidates states, “reproductive rights are a class issue”. Unconditional support for universal access to free contraception and abortion on demand is an essential requirement for any candidate aspiring to lead a socialist movement. If we want the Labour Party to stand at the forefront of the international struggle for women’s liberation, we can start by campaigning for: