Hypocrisy and fundamentalism: the attacks on women’s rights in post-coup Brazil 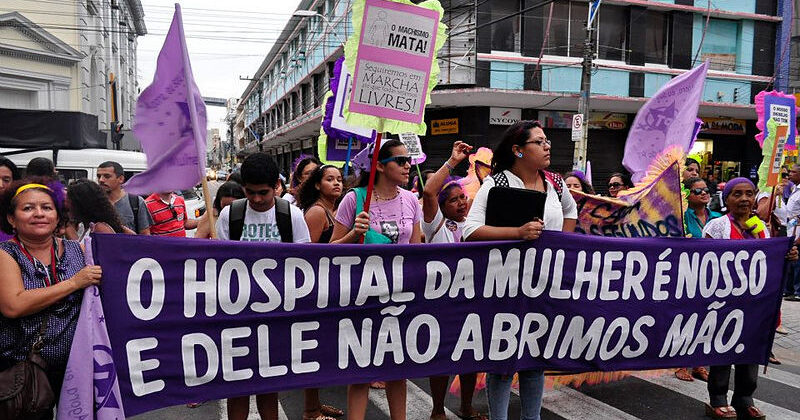 On 27 August 2020, the Bolsonaro government carried out yet another vicious attack on women’s rights. Following its reactionary, conservative and cruel policy, Paragraph 2282, issued by the Ministry of Health, attacks the constitutional right to assisted abortion.

In Brazil, since 1940, the law has guaranteed women access to assisted abortion when continuing the pregnancy threatened the life of the woman or when the pregnancy was the result of rape. In 2004, the Supreme Federal Tribunal approved a ruling which decriminalised abortion in cases of foetal anencephaly, a condition in which the greater part of the cerebral cortex is missing. It was opposition to that ruling that began the attacks on legal abortion rights.

In August 2013, President Dilma Roussef sanctioned a Bill that made it compulsory for victims of sexual abuse to receive immediate care by the national health service (SUS). Religious organisations immediately sought to stop the prevention of pregnancy with the “day-after pill” in cases of sexual violence because they argued this would open the way for doctors to perform abortions. The law presently stipulates that all hospitals in the public network must immediately offer among other services, diagnosis and the “morning-after pill” for the victim plus medical treatment of physical injuries and psychological counselling, protection against STDs (sexually transmittable diseases), HIV testing and access to information on legal rights and other available health services.

Shortly after the law was passed in October 2013, Eduardo Cunha, a deputy from the “evangelical faction”, introduced Bill PL 5069, which represents a huge step backwards for women’s rights. The Bill was a clear reaction by religious leaders against the guarantee of access to abortion in cases of rape and anencephalic foetuses. Due to a strong reaction from activists and parliamentarians who tried to amend parts of the text, the Bill came to a standstill in parliament, especially as the impeachment process of Dilma Roussef began soon afterwards.

The rise of reactionary forces after the parliamentary coup that ousted Dilma, then the election of Jair Bolsonaro and the formation of a socially conservative, far-right, government opened the way to renewed attacks on women’s rights. The dissolution of the Women’s Secretariat and the creation of the Ministry of Family and Human Rights under an evangelical pastor, Damares Alves, made it clear that the agenda for advances in women’s rights had closed. The period of regression, losses and attacks had opened.

At the end of 2019, Law 13.931 was passed, requiring health professionals to compulsorily report rape cases to the police. This law breaks patient- doctor confidentiality and effectively prevents women who suffer domestic violence from seeking medical help in rape cases because they fear the reaction of their abusers.

Last August, a case of rape shocked the country, both because of the nature of the crime itself and then because of the treatment meted out to the victim. A 10-year-old child, who had been sexually abused by her uncle since she was 6, became pregnant. The response to the child was so repressive that it took the action of a group of women in front of the hospital to ensure that she received medical care and that a procedure to terminate the pregnancy was carried out.

The government’s response to the action of feminist groups that supported the child was immediate. They issued decree 2282 which modifies Law 13. 931, violating doctor-patient confidentiality, by requiring doctors to notify the authorities. According to the feminist network of gynaecologists, the decree makes it difficult, if not impossible, for women to seek help and assistance, hidden from aggressors, thus exposing the victims to even more danger.

According to the doctors, confidentiality is vital for empowering women to denounce the aggressor. The compulsory attendance of an anaesthetist further bureaucratises the care. Doctors clarify that in most cases a termination by medicinal rather than surgical means makes such a presence unnecessary and in the latter case an anaesthetist would be mandatory in any case.

The decree prescribes the duty of an ultrasound examination, to be shown to the woman, with the sole purpose of trying to make women feel guilty about going through with abortions. And can increase the pain of women already weakened and raped.

The perversity of this fascistic government is clear to us. Decree 2282 has the clear objective of giving the government full control of all legal abortion procedures to control more and more the raped bodies of women (children or adults). The prior notification of assistance will give data for control and denial of women’s rights; if they manage to get access, the difficulties in having an anaesthetist (who can refuse to attend) will create more distress and suffering for women and, in addition, the ultrasonography constitutes torture for women victims of profound violence.

We are living at a time of deep social regression. In addition to all the losses as workers, we suffer as poor women. It is well known that in Brazil abortion is easily available and unrestricted for rich women. The prohibition is only for poor women, who are subjected to illegal procedures that mutilate or kill female workers, many of whom are mothers.

In the country where 180 rapes occur on average per day, the majority (53.8%) against girls up to 13 years old, according to data from 2018 of the Brazilian Yearbook of Public Security, this decree represents more than violence against women. It means that today we have a government that reaffirms this violence, this rape culture, by penalising women, condemning them to be mothers of the fruit of this violence, or even by torturing and imposing blame on these women who are victims of a male chauvinist society.

The 1988 Constitution guarantees a secular state and the separation of Church and State. Therefore, there is neither space nor constitutional basis for the interference of the Church in assisted abortion, guaranteed in the Penal Code since 1940. It is a huge step backwards for women, girls and children who are poor, innocent, unassisted, oppressed and weakened.

We know that the reality for women from the wealthiest classes is quite different. They are not exposed to any constraint, pressure or insecurity, the whole process is veiled, they are surrounded and attended to in total security and discretion. There are no leaks, no religious fanatics, no hypocrites demonstrating at the clinic doors. Therefore, it is not a question of concern for life, it is pure hypocrisy and fanaticism imposed by religious fundamentalism, which has strength within the current government, which is leading to the reversal of all the conquests achieved by the women’s struggle in the country.

We must resist these backward measures with all our strength. Our response must be clear and united in defence of the rights of working women! September 28 is Latin American and Caribbean day for legal abortion. We must take strong and decisive action so that this decree is revoked, and we can continue to advance our rights and not allow any retreat from them!

For the decriminalisation of abortion!

For the defence of women’s lives!