Hong Kong: Down with the National Security Law 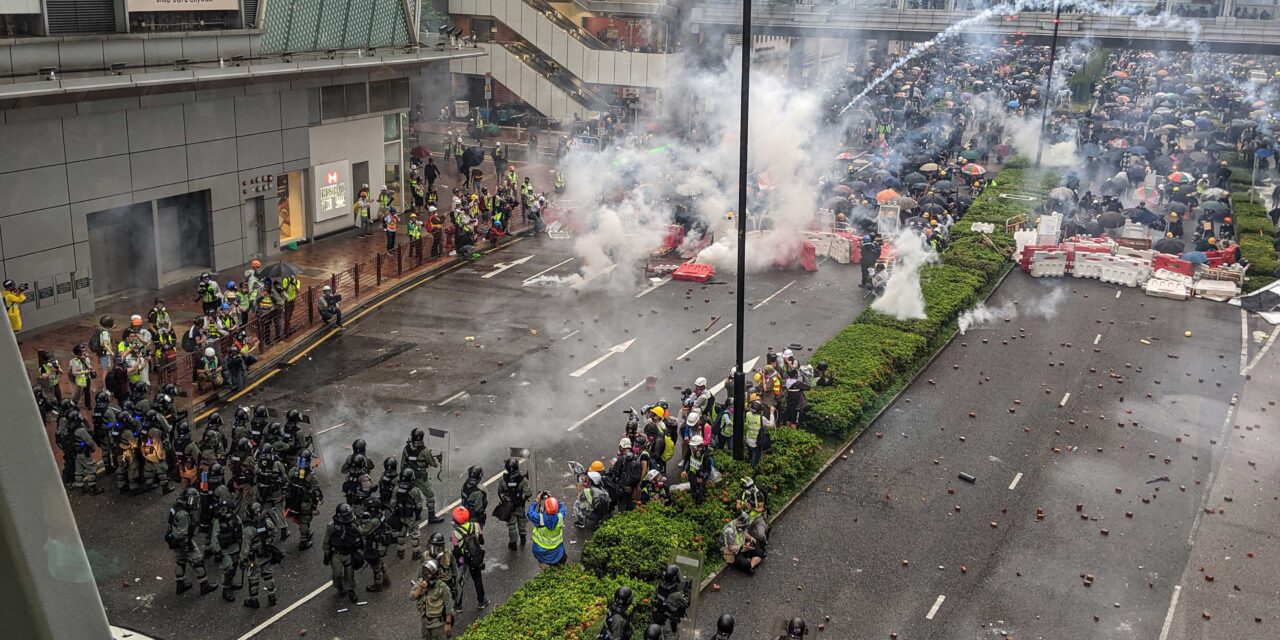 On July 1, Beijing’s National Security Law (NSL) was imposed on Hong Kong. It extends the laws against “sedition, conspiracy and collusion with foreign powers” that already operate within “mainland” China to Hong Kong. The law also means that the internal “security” agencies will now operate in Hong Kong as well. They will not be answerable to the police or courts there and will be able to arrest and deport to the mainland Hong Kong citizens who, in their view, violate the draconian new law.

Ever since the proposal for the new law was announced in May, it has been made very clear that its purpose was to bring to an end the series of huge pro-democracy demonstrations that have shaken the territory in recent years. Indeed, since disagreement with the law is itself likely to be interpreted as seditious, it effectively negates even the very limited democracy of the existing system.

The manner of its enactment was as undemocratic as its content; adopted by unanimous vote behind closed doors before its wording was made public.

On the same day, the anniversary of the return of Hong Kong to Chinese sovereignty, thousands marched through its streets in what has become the “traditional” demonstration demanding full democratic rights and, in particular, a democratically elected Legislative Council and Executive.

Within hours, 370 demonstrators had been taken into custody, 9 of them charged under the new law, the text of which was still unseen in HK. Today, July 8, schools were ordered to prevent all expressions of support for the democratic movement. Some idea of what the future could hold is given by the character and record of Beijing’s new head of security in HK, Zheng Yanxiang, who oversaw the bloody suppression of demonstrations in Wukan in 2011.

Much has been made of the assertion that the imposition of mainland law is a flouting of the agreement struck with the British which declares that Hong Kong will retain its autonomy until 2047 under the “one country, two systems” formula. British complaints, however, are thoroughly hypocritical – the British state allowed no democratic rights in its “Crown Colony” until the very end of its 150 year rule and is today the main arms supplier to, for example, Saudi Arabia, whose citizens, not to mention its immigrant workforce, have far fewer rights than the people of Hong Kong.

The workers of all countries, however, have every right, and every reason, to oppose and condemn this latest dictatorial decree from Xi Jinping. Coming in the wake of the vicious repression of the Uighurs of Xinjiang, including the now notorious concentration camps, it completes the picture of an aggressive imperialist power that intends to obliterate any semblance of opposition within its borders. It also serves to bully and intimidate other states into suppression of any open criticism of the dictatorial Chinese regime.
Nonetheless, Beijing’s motivation in Hong Kong differs from the other cases. In Xinjiang, as in Tibet, Beijing’s priority is geo-strategic; the consolidation and strengthening of borderlands, including by the displacement of the indigenous peoples through mass population transfers of Han Chinese. In Xinjiang, this is reinforced by the prospect of economic development based on the known mineral resources of the region.

In Hong Kong, the issues are more clearly political. Because of its particular history, the territory’s political culture is unlike that of the rest of China and, potentially, a source of instability and opposition. Though not a democracy, British colonialism allowed for “the rule of law” especially in respect of capitalist property rights, plus a degree of freedom of speech and other human rights. This is what is now under attack.

The Communist Party of China, headed by Xi, is well aware that its restoration of capitalism since the 1990s has created very powerful and potentially conflicting forces within society. Its entire political purpose is to contain those forces by its apparatus of control. That is the rationale behind the otherwise irrational and wasteful systems of censorship and surveillance, from the Great Firewall to facial recognition technology. The demands for free and fair elections in Hong Kong which, for probably a majority of Hong Kongers, are no more than a route to more efficient and responsible local government, really are a threat to the whole CPC regime.

This is not because of what such an elected government might do but because its very existence would be a permanent denial of the CPC’s constitutional right to rule. Particularly at a time when the downturn of the industrial cycle has coincided with the impact of the coronavirus pandemic, such a challenge cannot be tolerated by the regime.

In the long term, Beijing expects to erode the identity of Hong Kong by integration into the “Greater Bay Area” which also includes other major cities such as neighbouring Shenzhen. In the short term, it is understood that the suppression of democracy is very likely to lead to disaffection and even disloyalty but that is considered a small price to pay for insulating the rest of China from the contagion of democratic rights.

That is why the National Security Law, with its reference to collusion with foreign powers, has been imposed. If democratic opponents of the CPC can be characterised as agents of foreign powers trying to undermine the country’s rapid progress, then so much the weaker will be their influence within the country as a whole, and that is what the CPC fears most.

In this respect, those on the fringes of the democracy movement who call for Independence are playing into Xi’s hands but the hope of the mainstream of the movement that British imperialism will come their aid is also misguided. Britain is in no position to apply force to China, even if it wanted to, and Boris Johnson does not expect to honour his promise of entry into Britain for 3 million Hong Kongers and, in any event, entrance does not mean citizenship.

Equally, while the USA may choose to inflict more serious sanctions on China, this would just drag the people of Hong Kong into the developing trade-war-cum-cold-war between the two imperialists. Indeed, it could prove a step towards something far worse with more US warships despatched to the region to bolster anti-Beijing regimes.

Regrettably, the leaders of the democracy movement in Hong Kong have failed to draw the necessary strategic conclusions from the experience of recent years. The most important of these is that their most powerful potential ally is not any foreign power, near or far, but their own compatriots, above all the huge working class, just across the border of the “Special Administrative Region”.
In response to Xi’s new laws, socialists in Hong Kong will recognise that the relatively greater freedom they retain, in comparison to the mainland, allows them to redouble their efforts to establish and strengthen ties with the unofficial workers’ movement in neighbouring Guangdong province and beyond.

The oncoming economic difficulties will ensure opportunities to develop politically independent and democratically organised workers’ organisations. Within them, socialists will raise a programme that combines immediate and transitional economic and social demands on the capitalists and the state and fight for the formation of a workers’ party that can lead the struggle to overthrow not only the bureaucratic CPC but also the capitalism that it restored.

Around the world, socialists should support the struggle to defend democratic and workers’ rights in Hong Kong and call for their extension to the whole of China. They should condemn China’s repressive actions both within and around its borders while opposing the actions and sanctions of the other imperialists when they cite Chinese repression as an excuse for their own aggression.

All such measures, and counter-measures, part of the developing inter-imperialist rivalry, not only cause economic chaos but lead to the prospect of outright military conflict, which would be disastrous for the whole of humanity.