Germany: The second wave of the corona-sceptics? 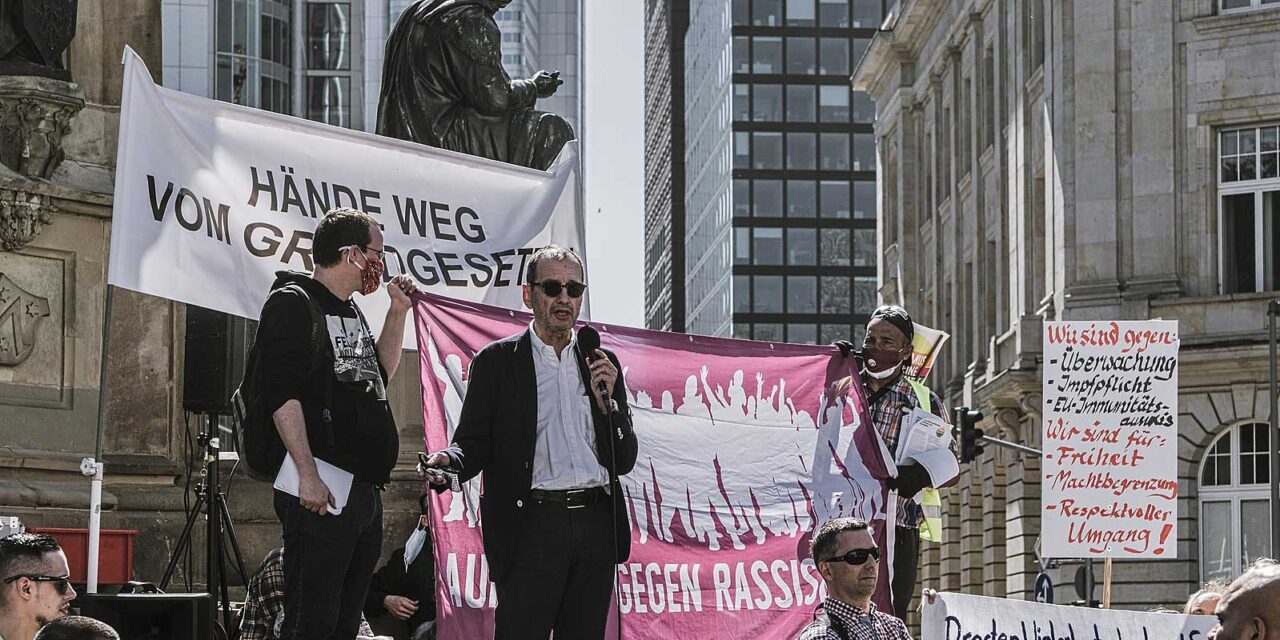 It was an eerie sight: up to 30,000 corona “sceptics” and direct deniers of the pandemic demonstrating in Berlin on August 1. The organisers of the so-called hygiene demonstrations mobilised from all over Germany to celebrate the supposed end of the corona pandemic. The number of new daily infections recorded worldwide is actually higher than ever. Even that leaves out of account the number of unreported cases, especially in the semi-colonial world, where health systems struggle to cope at the best of times.

As is well known, the figures are even rising in Germany. The opening up of the economy created a health risk here, too, but one which both capital and corona sceptics are prepared to accept.

In recent weeks, it did seem that the right-wing mobilisations were declining. Firstly, with the complete opening of businesses, schools, shops, restaurants, in other words, with the lifting of all real restrictions on the freedom of trade, the government had fulfilled one, if not the central, demand of the movement. Secondly, the obscure fascist part of the movement seemed to be more isolated. Thirdly, such demos had been pushed into the background, partly by counter-mobilisations but, above all, by the mass demonstrations in solidarity with Black Lives Matter.

The demonstration of August 1, however, makes it clear that the danger of a reactionary, petty-bourgeois mass movement has by no means disappeared. Nor will it if the organised labour movement, first and foremost the trade unions and the Social Democracy, SPD, but ultimately also the Left Party, continue to side with “their” government, while millions face redundancies or massive, permanent wage cuts through short-time working. This makes it easier for radicalised, reactionary entrepreneurs and petty bourgeois, as well as organised Nazis, racists and conspiracy theorists, to present themselves as the active opposition.

In this way, the right-wing mobilisation is not only a warning to the left and the workers’ movement. It also underlines the urgent need for an anti-crisis movement that makes clear working class demands, does not submit to the programmes of the Grand Coalition and capital but, at the same time, does not ignore the danger of the pandemic.

This sinister parade made its way through the streets of Berlin under the slogan “End of the pandemic – Freedom Day”. This not only contains the absurd idea that the pandemic is over, but also equates “freedom” with the bourgeois image of the ruthless individual with the right to infect everyone in pursuit of their own interests.

Worse, in recent months, antisemitic and racist tendencies have become increasingly evident in the mobilisations and “Freedom Day” is not a new title. In 1935, Leni Riefenstahl’s film, “Freedom Day! – Our Wehrmacht” was released on behalf of the NSDAP. It was the concluding instalment of her three-part propaganda film for the Nazis’ party congress. But, even if the choice of the motto were pure coincidence, which is hardly credible given who organised it, the demonstration would still be highly problematic and it would not change its deeply reactionary character.

But where do the political forces come from? The action was organized by Initiative Querdenken (Lateral Thinking)711, who organised an earlier protest in Stuttgart, and the Kommunikationsstelle Demokratischer Widerstand, (the Communication Centre for Democratic Resistance) KDW, around Anselm Lenz, who initiated the mobilisations at Rosa Luxemburg Platz in Berlin. In addition, representatives of the NPD, Drittem Weg, (Third Way) the Identitäre Bewegung (Identitarian Movement) Jürgen Elsässers’ Compact magazine, supporters of the QAnon myth, Citizens of the Reich, parts of the Pegida movement and other new-right to fascist forces also took part.

They certainly did not represent the sole leadership or the majority on the demo, but they undoubtedly shape the movement. In addition, several representatives of the AfD were also recognisable on the spot. The majority of those gathered were presumably recruited from a broad spectrum ranging from esoteric anti-vaccination activists to sceptics who consider the measures to be excessive, to small entrepreneurs and their employees who are facing economic ruin.

While the latter can presumably get more people on the streets at a major event, it is the activists and strategists of the New Right who can exploit the broad spectrum from confused remnants of the peace movement to supporters of the German Empire in order to pretend to be heterogeneous and pluralistic. Their true character is revealed by the fact that fascists are able to grow in their ranks. Although the petty-bourgeois-entrepreneurial wing insists on a programme of economic and “cultural” opening that rejects any consideration of the health risks to the population and thus, quite incidentally, supports the government’s relaxation measures, what we are witnessing here is a movement which shows the danger of the rise of reactionary forces in this crisis situation.

The fact that there were also isolated “left” forces present, which seem to come from the “peace movement”, does not make the matter any less harmless, but only all the more alarming. Far from being a counterweight to the Right, they are, in reality, their useful idiots. While platforms such as Rubicon and NachDenkSeiten were already problematic in some respects before Corona, their political decay is accelerating massively, while the “Rote Fahne” (“Red Flag”) group is increasingly appearing to have consciously crossed the line from Left to Right.

This is a dangerous mixture which shows the overall character of the period to be a social shift to the right as a result of the defeats of the Arab Spring and the movement in Greece, the rise of nationalism, the crisis of the EU and the intensified imperialist competition, all against the background of the political bankruptcy of the Left.

In August 2020, we are seeing the merging of Pegida and the anti-hygiene movement, a union of twins. One represents the shift to the right of the last decade in Germany, the other the potential danger of the current period of class struggle, when the workers’ movement is unable to give a class-struggle lead to the masses.

Ruthlessness as a programme

Whether they describe the corona virus pandemic as nothing more than seasonal flu or a fiction dreamed up by the likes of Bill Gates and the pharma industry, what they agree on is complete rejection of any restrictions, even as minor as the requirement to wear a face mask in enclosed public spaces.

The “freedom” they defend turns out to be a ruthless selfishness. This concept of freedom, of course, is well-established in capitalism. After all, the freedom of private property, which underlies this system, includes the freedom of some to act without restriction to exploit the misery and lack of property of others. We say it openly: We do not defend such a false freedom. We wear facemasks to restrict the spread of the virus as far as is possible. Even if this is a minor imposition on our freedom it is necessary for the mutual protection of all, particularly given the lack of a vaccine and comprehensive testing and tracing systems.

We also advocate wearing masks at demonstrations and actions like all other leftists who take the health issue, and thus the vital interests of the population, seriously. At the same time, however, we reject any political restriction on the right to demonstrate. We will need all means of political and trade union struggle to oppose all attempts to pass the costs of the crisis on to the working class – otherwise there is a threat of mass dismissals, impoverishment and evictions.

While the corona sceptics present themselves as victims of repression because of their violation of hygiene regulations, the brutal action of the Berlin police at a demonstration against evictions and gentrification reveals very clearly who the state really sees as its opponent. Dozens of participants in this left-wing demonstration were beaten off the street, run down and some of them were seriously injured, despite wearing masks and observing health regulations.

Of course, the corona sceptics will also take advantage of such real grievances for their mobilisation, but only to fit them into their overall reactionary views. The workers’ movement and the Left must, for their part, not only explain that but oppose those measures taken by the government that do not genuinely protect the whole population.

For example, the Grand Coalition wants to introduce compulsory tests for holidaymakers at airports. Although we think this is justified in principle, some questions arise such as: Who will pay for the tests? Who pays for possible quarantine steps? Is this then unpaid leave? Is the company paying for it? Perhaps, above all, if that is necessary for the travel industry, why not for the entire care sector? Another example is the threat of abuse of necessary regulations. In recent weeks, for example, the police in four federal states have used the attendance lists from restaurants for their “investigations”.

This shows that we must never place blind trust in the restriction of democratic rights by a bourgeois state. We need an independent perspective that does not automatically accept the excuse of the “necessary evil” at every turn. That is why we categorically reject the cooperation of the trade union leaderships with the government’s package of measures in solidarity with the employers’ associations. The self-imposed peace duty of the workers’ bureaucracy must be fought politically. The passivity of opposition parties such as the Left Party should not be allowed to pass without comment. Their silence contributes to the strengthening of this new-Right movement.

What do we need?
What we need is a movement that organises resistance against the measures of the state and capital and at the same time enforces hygiene measures controlled by the working class. Such a movement must reject the false opposition of Lateral Thinking 711, Resistance 2020 and KDW, which create the conditions in which the fascists can flourish. Where necessary, it must oppose them. Above all, we must build a broad anti-crisis movement that gives a class political response to the crisis.

We need to bring together the various social struggles of recent months, such as the impressive mobilisations of the BLM and of campaign organisations such as Migrantifa or the Fridays for Future movement, which wants to organise another international strike in September. We have to combine workplace actions such as against the dismissals at Galeria Karstadt Kaufhof (a shopping centre, Ed) with the fight for the rent moratorium, the expropriation of real estate companies or the #LeaveNoOneBehind campaign against dying in the Mediterranean.

The task of these movements and struggles is to build up anti-crisis alliances and to organise a large demonstration in autumn under the slogan “We will not pay for the crisis or for the virus”. They must increase the pressure on the trade unions and bourgeois workers’ parties to break with coalition politics and social partnership. In the past months, they have shown that they will not build such movements on their own – we must force them to do so!

This is the only way to show the working class, but also parts of the frightened petty bourgeoisie and the middle classes, that resistance against massive bailout packages for capital, while a large part of the population is facing the breadline, is possible and can and must be linked to the struggle against the health threat.

We call on all organisations and parties that share this assessment to join the fight to make the necessary become the reality.