COP25 in Madrid: why it failed and what we can learn 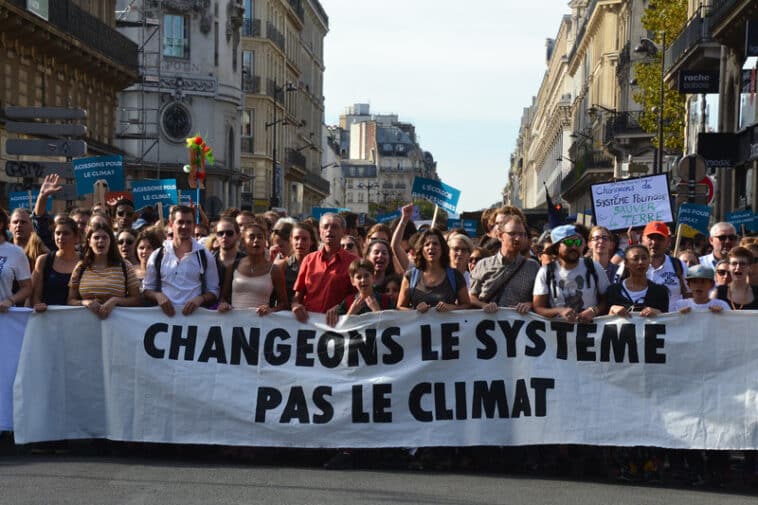 THE WORLD climate conference in Madrid was a complete failure. The final document is worse than ridiculous. Almost all the important issues, such as how to deal with emissions certificates or compensation for poorer countries, all of which are more immediately affected by climate change, were postponed to the next conference in Glasgow in November 2020. What remains are vague national climate protection “commitments”. Even the German government could hardly find anything nice to say about it. Extending the duration of the negotiations by 40 hours did scarcely any good.

Even if such conferences were extended for days and weeks it would do no good. The problem is not the shortage of time or too weak a commitment, but the competition between the nation states that has intensified internationally in the wake of the crisis of capitalism. Since the great global economic crisis of 2007/2008, there is less for each on the world market, so the struggle between the individual competitors for markets, raw materials, cheap labour, has massively intensified. Since climate protection threatens profits, none of the global players dares to take a step “too far” in the direction of sustainability, because they fear incurring economic disadvantages in comparison to their economic rivals.

For this reason, the USA withdrew from the Paris Agreement on June 1, 2017, and its main competitor, China, hardly dared to make any concessions in the global climate competition. Ursula von der Leyen, the new President of the European Commission, has once again staked the EU’s claim to be a global leader by claiming to be the “driving force for more climate protection”. But she failed to get backing for an EU inspired pledge to cut carbon emissions to net zero by 2050 or a Green New Deal policy. Nor were the villains of the piece limited to Trump’s USA, Bolsonaro’s Brazil, Modi’s India and Xi’s China. Within the EU, Polish Prime Minister Morawiecki said, “Poland will be reaching climate neutrality at its own pace” and he was backed by Hungary and the Czech Republic.

Madrid is just another example of the illusion that the UN and other similar institutions represent “world democracy”. The “needs of humanity” are unceremoniously swept aside as soon as the weather of the world economy gets rougher and the barometer of growth rates falls. Madrid’s failure echoed the collapse of the Iran nuclear deal and the threats of the nuclear powers to abandon previous limits and to begin a new round of building weapons of mass destruction. Then there are Trump’s trade wars. We can draw the conclusion from all this that there can be no “world democracy” as long as the world consists of nation states that compete with one another.

Rather, the UN, like the IMF and similar agencies, is simply an arena where the major imperialist and big regional powers assert their conflicting interests. Plans to “save the planet”, just like those for world peace, human rights or economic development, all grind to a halt in times of intensified competition. Because it is the capitalist system that is the engine of competition and the pillar of the nation-state form, we must build an international anti-capitalist climate movement to resolve this contradiction and save the planet.

For far too long we have trusted the capitalist institutions and the bourgeois politicians to find a solution for climate change. In Germany, Fridays for Future’s last day of action was still a big one, but it was hoping for the UN to act rather than doing something itself. The (non-existent) results from Madrid should therefore trigger new discussions in movements like Fridays for Future and Extinction Rebellion about where we actually want to go and who can implement this change.

After this weekend at the latest it should be clear to everyone that climate protection remains an issue that has to be taken up in the schools, workplaces and on the streets. What we need are basic structures at schools, universities and in workplaces that discuss democratically and develop ideas, accompanied by broadly representative international action conferences at which we can develop common demands and monitor their implementation.

No more trust in capitalist institutions, associations and parties!

We cannot listen to any more tales of being saved by “new environmentally friendly technology” or a “Green New Deal”, because it is clear that, since nature and profit, as well as nationality and international climate change, contradict each other, there can be no “green capitalism”. For us, climate change is not primarily a question of technology, but of how society relates to nature. So, it is not nature that is causing the growing list of disasters but the relationship that our economic system has to it.

This is precisely why fighting for the climate also means fighting for another basis for society, why climate change does indeed require system change and the system is capitalism. Approaches to this struggle come not only from the climate movement, but also from the uprisings in Chile, Iraq and Lebanon against neoliberalism, from Rojava and Chile against patriarchy or in many countries against the rise of the racist right.

The fact that the right-wing populists, Trump and Bolsonaro and the rest, blocked any movement at COP25, despite hundreds of thousands of activists on the streets in Madrid, shows us once again that our climate movement must position itself clearly against the right but also cannot rely on green capitalism. So let us learn from Madrid and build an international anti-capitalist movement to save the planet, involving Fridays for Future, Extinction Rebellion, the US Sunrise Movement and all other progressive movements in the world. Now is the time for action, not for vain hopes.