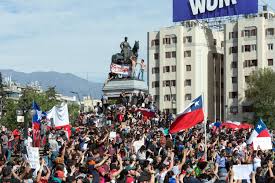 Chile joins a growing list of countries currently experiencing a mass revolt for a better world, free of corruption, poverty and austerity. These presently include Ecuador, Lebanon, Hong Kong, Sudan, Iraq, and Chile.

Chile has now seen weeks of riots, protests and mass strikes against the government of billionaire Sebastián Piñera. The demonstrations began in response to a fare rise on the Santiago metro of 30 pesos for single journeys.

Chile is the most unequal nation among the OECD states, with 36 per cent of the urban population living in extreme poverty. Meanwhile the richest one per cent of the population own 26.5 percent of Chile’s total GDP. Chile has ten billionaires in the Forbes list, with a combined wealth of about $40 billion, equivalent to roughly 16 percent of GDP. Meanwhile, 50 percent of people cannot afford to pay into the privatised pension funds and so face penury in old age. Young people suffer long intervals of unemployment and 30 percent of their jobs are on a temporary basis.

The current rulers of Chile, and their imperialist backers, had no understanding of the discontent bubbling under the surface. Only a week before the demonstrations exploded, the Financial Times had an article proclaiming Chile as “a beacon of stability and sound management”. Piñera himself declared that in relation to other Latin American nations “Chile looks like an oasis because we have a stable democracy [and] the economy is growing”.

Faced with an already high cost of living and low incomes, the increase in the metro fares was the straw that broke the camel’s back. Students occupied the stations and chained the tollbooths open, to give free transport to the masses. When the police responded with brute force, resistance spread like wildfire across the country. Soon there were running battles with the police and buildings were torched. Legislators in the lower house of the parliament abandoned their chamber and 20,000 police officers were pulled back from across the city to defend key government buildings as thousands of protesters besieged the ruling elite’s institutions

But of course there is much more to the story than this. As a popular slogan of the movement proclaims; “this is not about 30 pesos, it’s about 30 years!”, a reference to the decades since the end of the US/UK backed dictatorship during which most of the repressive institutions of the regime, the results of massive privatisations, and the economic inequality that they created, were left largely untouched.

In response to this movement the government deployed, not only the already hated carabinieros but also the military onto the streets for the first time since the end of the hated dictatorship of Augusto Pinochet in March, 1990.

So far, 20 people have been killed and 123 people wounded by the army and police and over 5,500 have been arrested, with horrific reports of torture and sexual violence being inflicted on them. The state declared a curfew, using laws from the 1980 constitution of the dictatorship. But none of this has deterred the people who are determined to continue with their demands for justice.

The movement spread to the poor neighbourhoods of the capital Santiago on October 19, with people defying the curfew with cacerolazos (banging on pots and pans), Piñera responded by declaring “we are at war with a powerful enemy”, and defended the bloody actions of the police with the argument that “democracy not only has the right but the duty to defend itself, using all instruments”. Yes, bullets against an unarmed people.

The organised working class now entered the fray in force; copper miners (who produce roughly 30 per cent of the world’s copper) marched out of their workplaces chanting ‘general strike’, they joined dockworkers who have shut down over 20 ports, truck drivers who have blocked the highways and bus drivers who walked out after the police murdered one of their colleagues.

These actions are bringing the nation to a standstill and crippling the ability of the capitalists to make profits. The United Workers’ Centre of Chile (CUT) and the Mesa Social (social board) called a one day general strike, which was strongly observed throughout the country. On October 26, the street protests were the biggest in the country’s history as over a million people poured into the streets of Santiago, some 5 per cent of the entire country’s population.

Faced with a movement of such a size, Piñera was forced to change his tune, offering protesters the resignations of all his ministers but not his own.

“The march we saw yesterday was a massive and peaceful march. We have all heard the message. We have all changed”, he declared.

He was soon falling over himself to offer what he called a “social agenda”, including an increase in the minimum wage, extra funding for pensions and a tax on the rich. But the response of the masses was clear, crumbs from the table would no longer suffice, they are fighting for fundamental change.

This is not surprising, especially given the history of Chile. In 1973, the social democratic government of Salvador Allende was overthrown in a bloody, CIA backed, coup to install Pinochet. The military immediately began to round up and destroy the mass movement that supported Allende.

In the ensuing years, the notorious neoliberal economists, “the Chicago Boys” pioneered what became known as the shock doctrine; rapid privatisation of industries, education, and even social welfare; reversing the progressive reforms of Allende’s Popular Unity government and even those of the Christian Democrats who had preceded Allende. This new economic doctrine would soon sweep around the globe, enforced by politicians like Ronald Reagan and Margaret Thatcher.

The result is a capitalist system of increasing inequality in which a tiny minority have accrued vast amounts of wealth at the expense of jobs, wages, collective organising and human rights. Chile, the first country to be experimented on in this fashion, is still suffering the consequences today. Its callous ruling class has hoarded the wealth it has made from selling Chile’s rich resources to multinational corporations in the imperialist heartlands.

The largest force amongst the protesting masses is the Frente Amplio, founded in 2017, as its name, “broad front”, suggests, it is composed of many small parties, including forces from the mass 2011 student movement in Chile but also the Liberal Party, a bourgeois party that retains links to the right wing. In the 2017 general election, it gained 20 per cent of the vote, and 20 deputies out of 155. Such a heterogeneous body can clearly not advance a clear strategy, though it is calling for a constituent assembly to sweep away the remnants of the Pinochet era.

Meanwhile, the Chilean Communist Party, whilst it supported the call for a general strike, urged workers not to take to the streets for fear of clashes with the army. It is critical of Piñera’s invitation to dialogue but only for excluding the popular forces. It clearly sees the way forward as pressuring him for further reforms, rather than launching an all-out struggle to bring him down and with him the whole post-Pinochet regime which preserves so much of the General’s neoliberal legacy.

Instead, the CP calls for reforms; a new pension system, decent wages that exceed the poverty line, a 40 hour week, ending the state of emergency and investigating the repression, a constituent assembly to create a unicameral parliamentary system and the freezing of reforms to the tax, pension, and labour laws that favour the rich. They end the list by saying; “Piñera must answer. He and his government are responsible for this crisis.”

In short, the CP leaders are repeating the disastrous polices of half a century ago. They are seeking reforms within a capitalist system even less able or willing to grant them except as temporary measures to get the masses off the streets. They fail to see that Chile has entered a revolutionary situation, one that requires revolutionary measures, not parliamentary reforms.

Any strategy that leaves the structures of power in the hands of the politicians and generals of the capitalist class is doomed to failure, indeed leaves the road open to yet more terrible repression. Whilst the Frente Amplio and the CP’s call for a constituent assembly is correct, to leave it in the hands of the present government and state authorities would put it into a veritable straitjacket.

The lessons must be learned from 1973, when Allende and his Socialist Party, backed by the CP, claimed that there was a way to radically improve the lives of the working people, even to make a socialist revolution, by exclusively peaceful means, using the capitalist state. The capitalists’ answer to this was constant economic sabotage whilst Allende was in office and when that did not break the will of the people; they unleashed the monster that was Pinochet.

If the movement is to avoid reliving the tragedies of the past, it must not be lured into a negotiated compromise with Piñera. The working class cannot take over the organs of the capitalist state, that is, the parliaments, the police, the judiciary, and use them for their own ends. The workers’ parties that do this inevitably end up serving the bourgeoisie, if they do not suffer the fate of Allende.

The working class and the youth are, according to reports, already beginning to create coordinating organisations that can preserve and direct the dynamism and energy of the mass movement. These will need to develop into fully-fledged workers’ and poor people’s councils with defence organisations, if they are to take up the challenge of ousting Piñera. Such organisations have been created dozens of times throughout history, including in Chile in the 1970s, the cordones industriales.

These failed only because they, or rather their political leaderships, did not recognise in time that the winning over of the rank and file soldiers, the destruction of the military high command, was an urgent necessity. In short, they did not recognise the necessity of installing a workers’ government and making a socialist revolution.

Instead, under the leadership of Allende and the Socialist Party, plus the Chilean Communist Party and the trade unions, they put their faith in the false strategy of the popular front, an alliance with the supposedly “democratic” wing of the capitalists, the Christian Democrats. The latter eventually turned them over to the tender mercies of Augusto Pinochet, himself appointed by Allende, who vouched for his democratic credentials to the masses.

To avert a similar disaster, the working people of Chile have to put their faith in their own organisations and their own power, a power that is already forcing major concessions, and can grow stronger by the day if it is not lured into negotiations.