Australia burns: who will douse the flames? 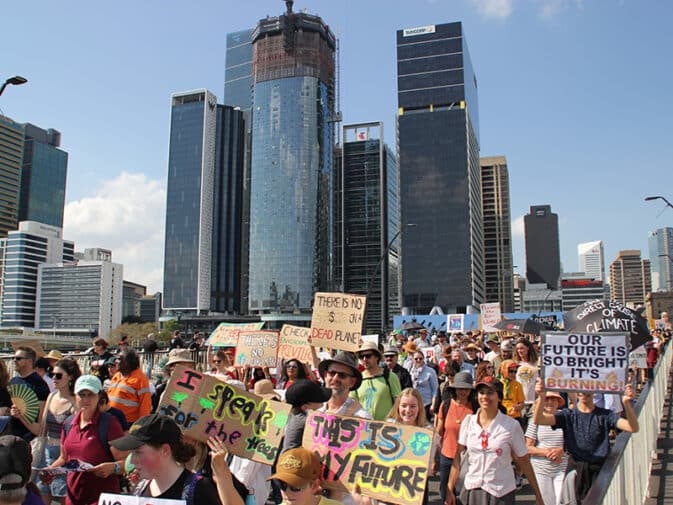 AS WILDFIRES rage across swathes of Australia tens of thousands of people have taken to the streets in every major city to demand the resignation of the government and action on the climate emergency.

For weeks global media has been awash with apocalyptic images of flaming skies, refugees, incinerated forests and the charcoaled remains of the country’s unique fauna. This has led to an outpouring of support and generosity from people across the world; millions of dollars have been donated to fundraising drives for victims and volunteer firefighter brigades.

The question everyone is asking is – what role is climate change playing and could anything have been done to prevent this tragedy?

Everyone that is, apart from the Liberal government of prime minister Scott Morrison, whose attitude was best summed up by his deputy who claimed “we’ve had fires in Australia since time began”, dismissed the concerns over climate change as the “ravings of inner-city lefties” and insisted Australia should absolutely continue its extraction of fossil fuels. Morrison, not to be left out, weighed in to berate Greta Thunberg for “increasing the anxieties of our children” (apparently oblivious to the thousands of children forced to flee the destruction of their homes and communities).

As usual with climate denying politicians in the pay of fossil capitalism, the inconvenient facts point to the opposite. Public services in Australia have been systematically attacked by successive governments, both Liberal and Labour, in order to pay for tax cuts to the wealthy and sustain vast military budgets to back the US arms race with China.

The mostly volunteer fire-fighting service has faced a drastic decline in numbers thanks to a declining rural population and budget cuts – 17,000 have left in the last five years alone. When a Royal Commission into the deadly 2009 fires called for crucial equipment and funding, they were ignored. When a 2015 Climate Council report recommended doubling the number of professional firefighters to 22,000, they were ignored. When, in April 2019, 23 fire service officials wrote a public letter to the government warning them that the coming fire season would be devastating, and again appealing for equipment and funds, they too were ignored.

As for climate change not being a factor, this too is a lie at war with all the available evidence. It is true that wildfires are a perfectly natural phenomenon, but it has been well documented that the conditions created by a warming climate would increase the frequency and intensity of such extreme weather events. The major fires in 1995, 2003, and 2009, all coincided with El Nino weather events and two with natural phenomena related to rising sea temperatures in the Indian and Antarctic oceans.

The most recent fires have not coincided with these cyclical events and, what is more, started months before the typical “fire season” in the hottest months of January and February. The reason is not hard to fathom; last year Australia saw record-breaking temperatures combined with record low rainfall. Ten of the hottest years on record have occurred in the last 14 years. One study shows that for every one degree rise in the average temperature, there is an increase in lightning strikes of 12 per cent.

The cumulative effect of massive cuts to public services, infrastructure and climate change are combining to create the perfect conditions for devastating wildfires.

But if you only dig a little it is not surprising that these politicians claim the opposite. Morrison ran on a climate denial policy, downplaying the severity of the crisis whilst trumpeting the supposed benefits to the economy (read, profits) of extracting fossil fuels. Fossil exports account for 34 per cent of all exports. The government has just signed a deal with the company Adani to mine coal for new power stations in India.

For all their rhetoric, Labor are no different. Labor has governed for 19 of the last 37 years and failed to take any serious measures to wean Australia off its addiction to fossil fuels. As a result, the country is responsible for around five per cent of global carbon emissions – a figure that is set to rise as new planned coalmines open and LNG production increases.

In short these people are bought and paid for by fossil fuel companies, the wealthiest industry on earth. The system is incapable of reforming away from fossil fuels, especially in the given timeframe; too much profit is at stake. This is proven by the fact that, nearly 30 years after climate change was announced as a major threat to humanity, Australia this year ranked bottom on the list in the Climate Change Performance Index. Indeed under Morrison the emissions are actually increasing!

But because they are prisoners to the logic of their own system they become too ignorant to believe the truth or too cowardly to take on the companies. Instead they are willing to sacrifice everything. The price ordinary people will pay is staggering; already 27 have been confirmed dead, over 2,000 homes have been destroyed and estimates of up to a billion animals have been killed.

The air quality in many of the major cities has been rated the worst in the world, the toxicity registered by the Australian Medical Association stand at “fatal levels for many”. But these figures only skim the surface. How many thousands have been thrown out of work or had their livelihoods destroyed? By how much have rich ecosystems been irreparably damaged?

In states such as Victoria where a 2017 study showed 54 per cent of people were either uninsured or under-insured, meaning many will never recover. The $2 billion (AUD) reluctantly pledged by the government is damage limitation. Fifteen extreme weather events caused over $1 billion dollars each in damages around the world in 2019. This is the new reality facing humanity. Patching over mistakes after the fact will not suffice.

Nothing exposes more starkly the criminal short-sightedness of the ruling class and the system which guarantees their wealth and security. The continuation of this system, capitalism, poses an existential threat to the survival of humanity. They are leading us down a road towards catastrophe, not only in terms of wilful inaction on climate change but due to the rising tensions and threat of global war between the imperialist powers.

The overwhelming majority of humanity has nothing to gain from being led down this road and thankfully as millions have shown in dozens of countries around the world, people are not willing to be blindly led into climate barbarism. But to demand the ruling class changes its ways – at its own cost – is a dangerous illusion, one we do not have time for. In 2019 the richest 500 individuals increased their wealth by 25 per cent to $5.9 trillion dollars; they are plundering the earth while they still can, trapped in the logic of their bankrupt system.

The only solution is to forge a movement, linking the climate movements with the organised working class, that is capable of creating democratic structures that can replace those of the rich, woefully exposed as inadequate. A movement that can take power through revolution and seize the stolen wealth of the richest to democratically transform our economy away from fossil fuels and towards mitigating the worst effects of global warming, whilst simultaneously improving the lives of the millions who now suffer under capitalism.

The wealth, created by the labour of billions, is there for the taking. The social force, the working class, is growing larger and stronger by the day and history shows it is capable of enacting such a radical transformation. The will to make changes is demonstrated by the current struggles around the world. The only thing missing is the leadership capable of manoeuvring past the obstacles and avoiding the illusions of those who would compromise with the self-interested elite of a decaying system.

As immediate measures we demand: