All change at Unison? 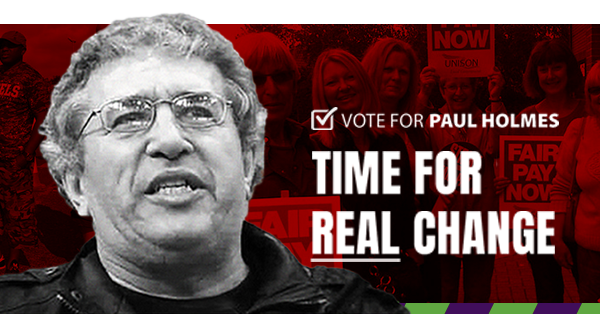 The nominations have been counted and all four candidates for the General Secretary post in Unison are “on the ballot paper”. Could this election, the first without a sitting incumbent standing since the 1990s, change the face of Unison?

The first question to answer is, why is it important? Unison has 1.3 million members, making it the biggest union in Britain, a majority women members, a large ethnic minority membership involved in self-organised Black Workers Groups, many densely packed in “key worker” roles in local government, education, NHS, care homes, etc. and many migrants.

The potential for Unison to play an important role in organising the fightback is there for all to see. It even has progressive policies, though these are never fought for in the Labour Party, which it is affiliated to. The blockage is the bureaucracy with its full timers and lawyers blocking workers’ action and frustrating their will to fight when branch and workplace activists take the initiative – e.g. Unison’s refusal to fight for a 15% pay rise now for NHS workers.

The candidates are front runner and continuity candidate Christine McAnea, with over 200 nominations, Paul Holmes and Roger McKenzie, neck and neck, McKenzie with more branch nominations but Holmes with the important Local Government executive’s support, and Hugo Pierre with far fewer nominations, however amongst those that of the black workers’ executive.

In the absence of a  candidate chosen by a genuine rank and file organisation of branch level activists, for Red Flag the question of who to support rests on which candidate best represents the hopes, aspirations and organisation of such activists and whether they use their campaign to promote workplace resistance and to link up and support those struggles. A successful campaign building links with many branches and showing the strength of the rank and file could then be the basis for a united and ongoing organisation fighting to democratise the union and break the power of the bureaucracy.

In this respect, not only Christine McAnea, the preferred candidate of the entrenched officials, but also Roger McKenzie is excluded. Roger has been playing up his antiracist credentials and indeed he has a record of speaking on Stand Up To Racism platforms among others. He has peeled off some support from Labour Link, Unison’s Labour Party wing, and from Black Workers Groups.

But McKenzie has been a Unison official for ten years and is currently, like McAnea, an Assistant General Secretary. Not once has he used his position to speak out against sell-outs, like the 2011 great pensions robbery, or bureaucratic scandals, like the 2015 Unisongate affair. If he is elected, even with rank and file support, those supporters have no way, no network, to hold him to account.

By contrast, Paul Holmes and Hugo Pierre represent real networks (if not genuine rank and file or democratic organisations) which could flourish should either win. They pledge to take a worker’s wage, to make all AGSs elected posts and lift the restrictions on conference motions. Hugo emphasises the fight to defend every job and for £10 billion extra funding for councils. Paul focuses on taking on private contractors and giving 50% of all Unison revenue to branches for organising. Both support the nurses and a minimum wage of £15 an hour.

As it stands, Red Flag supports Paul Holmes, as we did during nominations. He has an impeccable record of struggle, second to none, he enjoys the support of the largest (though highly bureaucratic) left grouping, Unison Broad Left, and got triple the number of nominations Hugo did. He is clearly the rank and file candidate best-placed to win.

Indeed, the prospect of the left vote for progressive change being split two or even three ways, if you include McKenzie, is haunting sections of the left. Former NEC member and influential blogger Jon Rogers has called on all three to meet and agree on a unified candidate and trading of manifesto or policy commitments. After all, the three candidates’ nominations total more than McAnea’s.

Hugo responded the day after the result of branch nominations by echoing Rogers’ call for the three to meet, emphasising his (and therefore the Socialist Party’s) willingness to withdraw if agreed he is not best paced to win. As we have outlined above, Red Flag supporters would not agree to either Paul or Hugo standing aside for Roger, who could reveal his bureaucratic mindset by refusing to support either of the real change candidates anyway.

Nevertheless, we urge Paul to meet Hugo and to agree to much of the SP candidate’s platform that is not already included in his own, for example the demand for £10 billion extra funding for councils. A united candidate emerging from that meeting would then be able to stand firm against the bureaucratic candidates, left and right.

But the fact that we have got to this stage in the election campaign and have to leave it to the decisions of two men behind closed doors reveals the real weakness of the Unison left: that it has no organs of its own to draw up fighting policies, elect leaders from its ranks and organise the resistance where it matters most – in the workplace.