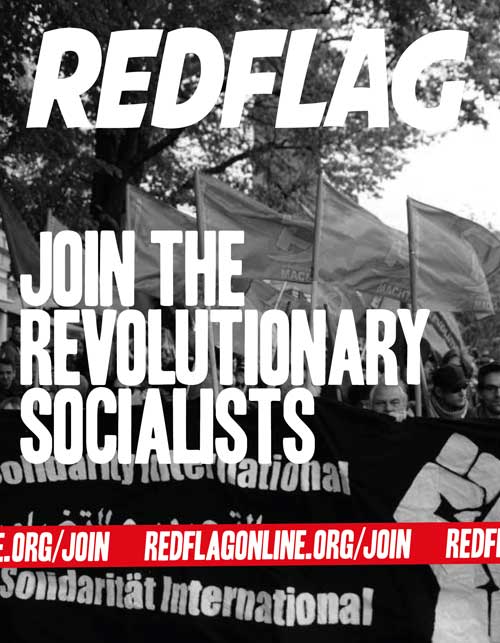 What we stand for

We are a socialist organisation that fights for the abolition of capitalism through social revolution, workers’ power and a democratically planned economy. Our goal is communism: a classless society which heralds the final liberation of humanity from exploitation, oppression and war.

Capitalism is a crisis-ridden system that repeatedly plunges the world into destructive phases of economic downturn, war and ecological collapse. Private ownership of the means of production obstructs the development of human potential and condemns billions to poverty while a few hundred billionaire oligarchs monopolise wealth and resources.

The alternative to capitalism is generated by the class struggle of the modern working class which repeatedly organises resistance to the ruling capitalist class. Today, with global capitalism again entering an historic crisis, working class resistance is springing up everywhere against the capitalists’ attempts to preserve their system at our expense.

The Fourth International was founded by Leon Trotsky in 1938 to challenge the misleadership of social democracy and Stalinism, but since 1951 has abandoned this task and everywhere adapts to their leadership. For this reason, we everywhere raise the call for the formation of a new world party of social revolution, a Fifth International.

If you are a class struggle fighter, if you are an internationalist – join us!

What we stand for

Capitalism is a system based on the systematic exploitation of the working class by a tiny class of capitalists who own the greater part of the world’s wealth, land, and productive forces. The contradiction between the expanding power of socialised production and the profit motive governing private ownership condemns the system to recurring crises of increasing frequency and intensity.

The competitive struggle between capitalists brings anarchy into the national and world economy. Millions starve while food is destroyed to maintain prices. Commodities rot or rust unsold in a world of acute want for the majority of humanity.

In its final, imperialist stage, the major capitalist powers – the USA, the European Union countries, China, and Japan, cruelly exploit the ‘Third World’; military coups, blockades, and debt-bondage reduce nominally independent nations to the status of semi-colonies, crippling their development in order to deliver super-profits for the parasitic banks of Wall Street, the City of London, and the world-straddling multi-national monopolies.

Competition between the imperialist powers overflows the economic sphere and generates political and military conflicts. The growing tension between the imperialist blocs produces trade wars that threaten the prospect of conflict between nuclear armed superpowers. In Britain, Brexit, partly a result of the rivalry between the USA and the EU, partly a response to the economic decline of a once great power, is symptomatic of the realignment of the major, imperialist powers into rival, ever more nationalist blocs. Similarly, the US and EU conflict with Russia fuels wars in the Middle East and growing conflicts with China in East Asia. These all point to the danger of regional wars and ultimately another world war.

Today, we stand on the precipice of climate catastrophe, which is already devastating the lives of millions of the world’s poorest people. Only by taking control of energy production, agriculture and manufacturing on an international level can we shift away from fossil fuels, reverse global heating and limit the effects of mass extinction. Yet, all those resources are the private property of capitalists, who will never relinquish control voluntarily.

The lockdowns resulting from the coronavirus pandemic and the economic depression this has exacerbated all demonstrate how society rests on the labour of the working class, many of whom, recently dubbed “essential” and publicly applauded, are poorly paid and insecurely employed. Once the health crisis is over, millions of these workers will be thrown out of work (and even out of the country).

To save society from a prolonged and barbaric regression it is this essential class, the direct producers of all social wealth, which has the need, the interest and the capacity to seize control of the economy and plan it in the interests of the common good, i.e. socialism. The goal of socialism is the transition to communism: a classless society which heralds the liberation of humanity from exploitation, oppression, and war.

A system based on the private ownership of the economy depends on the exploitation of women’s unpaid labour in the home to replenish the ranks of workers for future exploitation on a daily and generational basis. This is enforced through the institution of the nuclear family, religious and patriarchal ideology, and generalised sexual violence. The need to uphold the oppressive ideals of the patriarchal family means the oppression not only of women but of all LGBT people, and youth, in bourgeois society.

Capitalism was built on the foundation of colonialism and slavery, which generated the ideology of racism to justify the enslavement of millions of Africans, and the genocidal conquest and division of the world amongst European and North American empires.

These systems of ideological and institutional oppression ultimately serve capitalism. Only the abolition of private property in the large-scale means of production, and the creation of a planned economy can put an end to the material basis of exploitation and oppression.

Capitalism is an international system. The growth of production breaks down national barriers, reduces isolation, moves millions of workers around the world with no concern for borders, language or culture.

International chains of production and an international division of labour hint at the world of the future.

But the capitalists are an inherently nationally based class. Having come to power on the basis of their ownership of industry, trade and commerce within a given territory, they defended their wealth by strengthening the nation state.

Now, although their economies and wealth have grown beyond national boundaries, these states act as a fetter on the rational and integrated development of productive forces. They are a major obstacle to the international planning of production to halt and reverse the effects of climate change.

The working class, by definition, owns no part of any economy. Since workers find themselves employed by capitalist firms rooted anywhere in the world, they are an international class, and this is made clear by the great waves of migration as capital itself relocates production. As the first international class, rooted in and dependent on the international economy, it can only control and direct production by owning that economy, that is, by international social ownership, socialism.

The victory of socialism necessarily means overthrowing the various national capitalist classes and this will not be done simultaneously everywhere. The bitter experience of the USSR, however, demonstrated that socialism in one country is a reactionary utopia that inevitably leads back to capitalism.

Just as the class struggle in one country means centralising and concentrating it on a national level against the capitalist class as a whole, and its apparatus of power – the state – so victory over capitalism as a whole means constituting the working class of different nations as a consciously international class.

For this reason, internationalism is not simply a description of solidarity. How the class struggle is fought in one country, whether it suffers defeats or celebrates victories, has a direct consequence for the working classes of other countries. An internationalist consciousness, therefore, is a necessary factor in the strategy of the class struggle. Ultimately, a world federation of socialist republics will supersede both the nation and the state itself.

Only the working class can lead the oppressed masses of the planet to the achievement of this historic task. To establish the democratic rule of the majority means depriving the capitalist class and its allies of their wealth, power and privileges. The stakes – on both sides – in such a struggle mean there can be no peaceful, parliamentary road to socialism.

It will take a social revolution, which smashes the armed power of the capitalist class – its state – and replaces it with the dictatorship of the proletariat, based on workers’ councils and a workers’ militia, to accomplish this goal.

The task of the workers’ state is the expropriation of the capitalist class, the abolition of their ownership of the means of production and its replacement by socialist production, democratically planned with the participation of all, to meet the needs of humanity and the ultimate source of all wealth, the earth.

Understanding the world is not enough – the point is to change it through revolutionary action. Red Flag exists to organise workers and young people in this struggle.

In the advanced capitalist states, the working class is repeatedly held back from the struggle for power by the social-democratic (Labour) parties, the trade union bureaucracy and the Stalinist parties. These bodies – although based on the workers’ organisations – pursue a pro-capitalist policy, sacrificing the historic aims of the working class for reforms within capitalism. However, in periods of crisis, capitalism seeks to recoup any concessions it has been obliged to concede. Caught between its commitment to capitalism and the material interests of its social base, the leadership of the labour movement is thrown into crisis. If it is to defend its interests, the working class must resolve that crisis by defeating the pro-capitalist wing and advancing against capital itself.

To this end Red Flag fight inside the workers’ movement to link existing struggles – even ones for only partial demands – to the struggle for working class power. In each struggle for pay, against closures, for democratic rights, we fight for forms of organisation and elements of workers’ control that bring workers into conflict not only with an individual capitalist, but with capitalist power and the capitalist system. This strategy of transitional demands serves as a bridge between today’s struggles and the tasks of the socialist revolution.

On the basis of these principles, Red Flag advances a programme to challenge the mis-leadership of the workers’ movement by reformist, Stalinist and centrist organisations. Here we outline the fundamental elements of our programme, which are developed in detail in our national and international programmes.

Our goal is the creation of a genuine, mass revolutionary party capable of challenging social-democracy and Stalinism for leadership across the whole range of working class struggles. Our model is the Bolshevik party that led the Russian revolution to victory in – so far – the only successful socialist revolution in history.

We do not claim to be “the party”, as so many groups on the left do. We are restricted by our size to arguing for our programme, our tactics and strategy within the working class vanguard. But, at the same time, our objective is the maximum involvement in the class struggle, fighting for our ideas while rendering the maximum assistance to workers in action.

We intervene into the mass organisations of our class and progressive struggles, from Labour and the unions to the social movements, helping to build and democratise them, taking part in their debates so as to win them to an effective anti-capitalist strategy, based on the class struggle and on workers’ self-organisation, mass action and anti-capitalist policies, the preconditions for a real workers’ government.

Red Flag is the British section of the League for the Fifth International, which exists to agitate for the creation of a new world party of socialist revolution, whose emergence is the precondition for the working class conquest of power and the establishment of the world socialist order.

If you agree with our aims – join us!