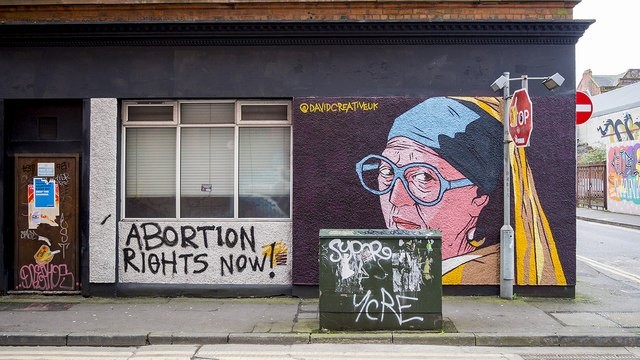 At midnight on 21 October, abortions and same-sex marriage were legalised in Northern Ireland. The new law was passed in Westminster rather than Stormont as the devolved administration hasn’t sat since January 2017 amid political deadlock. The legislation, proposed as an amendment by Labour MP Stella Creasey and passed by 332 votes to 99, was the culmination of a campaign by backbench MPs and women and LGBT rights organisations to bring civil rights in NI in line with Britain.

The main driver for the legislation was the case of an unnamed woman who faced criminal charges in NI for buying abortion pills for her 15-year-old daughter. On 22October, when the procurement of abortion pills had ceased to be a crime, the Judge instructed the jury to acquit. The woman responded to the decision saying, “For the first time in six years I can go back to being the mother I was without the weight of this hanging over me every minute of every day. I am so thankful that the change in the law will allow other women and girls to deal with matters like this privately in their own family circle.”

It is estimated that over the past 50 years, 60,000 women have had to travel from NI to Britain to terminate pregnancies. In the north, abortion was illegal in almost all circumstances including rape and incest. Now, the British government has three months to put in place guidelines for free, safe, legal and local abortion services. The government’s Northern Ireland Minister has announced the first same-sex marriages will take place on Valentine’s Day 2020.

Pressure has been building for legalisation of abortion and same-sex marriage since the Republic of Ireland voted to legalise both via referenda in 2015 and 2018 respectively. Abortion has been legal in Britain since 1967.

The fact Westminster can make laws in the north of Ireland is an unresolved hangover of colonialism that contradicts the wishes of the majority of people living on the island of Ireland. Brexit has brought the British border in Ireland back into the spotlight and raised the issue of independence. The failure of Stormont power sharing reinforces the need for a referendum on the status of northern Ireland by the Irish people as a whole.

The unionist parties in NI were bitterly opposed to the legalisation of abortion and same-sex marriage, with DUP leader Arlene Foster branding it a “shameful day”. These parties did attempt to bar the legislation by attempting to reconvene Stormont on 21 October but when nationalists walked out they were left unable to pass the necessary legislation. Attempts to persuade the speaker to suspend the usual rules so they could pass their Defence of the Unborn Child Bill also failed.

However, there is still a danger the legislation could be delayed or reversed, and this is certainly the unionist parties’ intention. Pressure could also be brought to bear from the Catholic Church in the north. Whist it seems unlikely Stormont will reconvene in the near future, the threat it poses to civil rights in those circumstances is very real.

On 3 October, the High Court ruled that NI’s abortion laws breached the UK’s human rights commitments. A declaration of incompatibility was withheld pending the outcome of the legislation that became law on 22 October. However, if the law were to be overturned by Stormont or Westminster, the High Court would then have to consider whether to make a declaration and pass the matter back to Westminster to reconsider. Unfortunately, there is the potential for this to be caught up in Brexit, as the Tory Party have made clear they want to use divergence with EU legislation to ditch human rights.

The question of what provision will be made for abortion in NI is undecided. A 12-week consultation has launched, after which guidelines will be produced. It is likely the provision will be similar to that in the UK, which whilst better than that provided in the Republic of Ireland still falls far short of decriminalisation and the full right of women to control their own bodies.